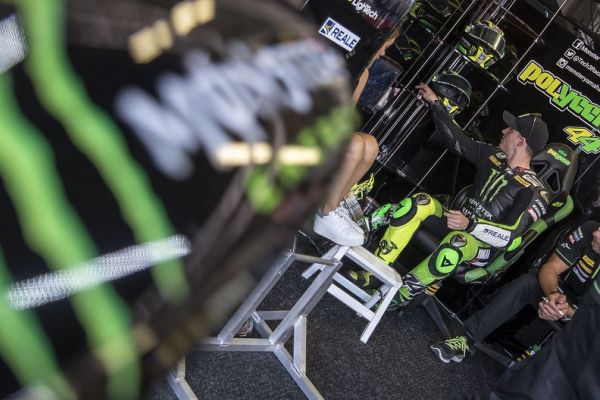 Pol Espargaro ended the first day of free-practice as the fastest man around the Misano World Circuit in San Marino.

The Tech3 Yamaha rider didn’t race in the MotoGP race in Silverstone last weekend after being involved in a scary crash along with Loris Baz. Whilst Baz broke the bottom of his leg, the Spaniard didn’t suffer any serious injuries and was fit enough to post the fastest lap of the day in Misano, a 1:32.769.

Michelin have brought a new front tyre to Misano, and Espargaro said that the new Michelin tyres have allowed him to ride “the way he wants” en route to not only posting the fastest single lap time of the day, but finding himself near the top of the timing screens throughout both the morning and afternoon sessions.

“It’s a great feeling to end the day in first, even if it is just the beginning of the weekend and with the plans that we have for tomorrow, we hope to continue progressing,” said the Spaniard, who is still searching for his first MotoGP podium.

“Today the bike ran really well and I felt very comfortable on it at the Misano circuit. In addition, the tyres that Michelin brought here have allowed me to ride my Yamaha more in a way that I want to. The rear hard compound has a lot of grip and performed well whilst braking.

“The end result is a small trophy but the important work starts tomorrow, so tonight we will check some data to improve a bit because there is not much of a gap between the other riders.

Pol said that whilst still sore after his crash in the opening stages of the British Grand Prix, it’s not causing him pain when he is on the bike, allowing him to ride close to his maximum.

“Another positive from today is that my physical condition after the nasty crash in Silverstone is not affecting my riding whilst on track. Therefore, I look forward to getting back on the Yamaha and I will do my absolute best to get a solid grid position for Sunday’s race.”