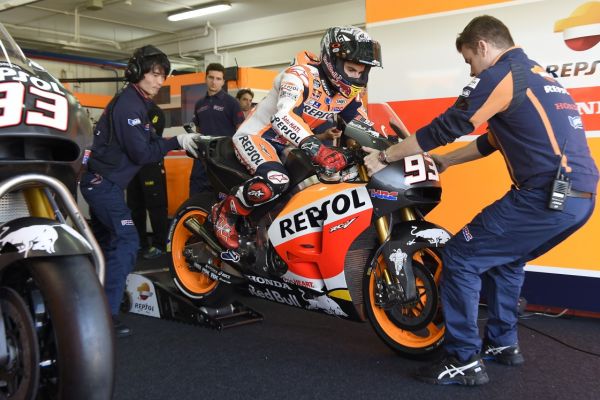 Marc Marquez ended the second day of the final MotoGP Official Test fastest, as he bows out of a season to forget.

Both of the bikes run with the new Michelin tyres as well as the Magneti Marelli electronics. The biggest difference between the two bikes is the new engine. The new Honda engine was brought to Valencia with the aim of delivering a softer power delivery to the notoriously harsh power.

Much like the first day, the Spaniard suffered a small crash. Once again Marquez lost the front end of his Honda, this time at the final corner. Once again there was only cosmetic damage sustained to his bike.

Despite ending both days of the session fastest, the two-time MotoGP World Champion thinks there is still a lot of room for improvement.

“The times and the standings at this test are not important, because we have seen that there is plenty of room for improvement. I think we all have a lot of work ahead of us with the new electronics, because it is very different to what we had before,” said the 21-year-old.

“Today we spent the whole day analysing the new Magneti Marelli software. The area we must improve the most is exiting corners, rather than engine braking and the anti-wheelie which I didn’t feel was much different – although we are still using a very basic setup.

“We are trying out many things and the problem is that it is a very slow process to find a good base. After each five-lap stint, you spend a lot of time in the garage waiting to go back out. We also tried the new engine, although there are still many things to setup and we have to first focus on the electronics before studying that properly.”

HRC will be in Jerez at the end of the month to complete any final testing before the winter testing ban comes into place, from the 1st of December.