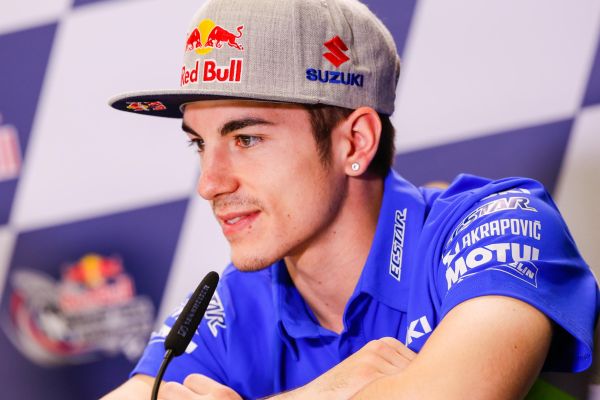 Maverick Viñales has insisted that speculation over his future motivates him to go faster, although he’s only focused on Suzuki at the moment.

With many accepting in Austin that a Lorenzo deal to Ducati is imminent, a lot of the attention is moving to who will replace the Mallorcan in the Factory Yamaha team. Viñales is thought to be Yamaha’s first choice should they be on the hunt for a new rider.

Viñales has been the stand-out performer in the opening weeks of the 2016 season, the 21-year-old has converted strong testing pace into good results on the track. Viñales was disappointed to end the season opener in sixth place right behind Dani Pedrosa, before crashing out of third position in the closing stages of the Argentine Grand Prix last weekend.

The Spaniard has a deal with Suzuki that will allow him to leave after this season, in spite of the fact there is an option that can be picked up for a third season with the factory Suzuki team. Despite all the speculation around his future, Viñales says that it motivates him to go faster, whilst focusing solely on Suzuki.

“It’s always good to have this in mind, it motivates me and helps me find my style,” said Viñales. “But for now I’m not thinking about the future. I feel very good here and only think about giving my all on the Suzuki.”

Viñales was set for a career best third position at the Termas de Rio Hondo circuit last time out, before the Spaniard lost the front end of his GSX-RR at turn one whilst pressuring Valentino Rossi for second place. Despite Argentina “leaving a bad taste in the mouth”, Viñales says it’s given him the confidence he can challenge at the front once again.

“For sure it was disappointing as I was right there. I had the podium in my hands and I made a mistake and I can’t accept that I made this mistake when I had the podium there,” he said. “It would have been great to bring Suzuki to the podium because its been a lot of years since the bike was at the top.

“But anyway, I feel confident that I can try to do it again. For sure I learned a lot. When I was riding behind Vale, Iannone and Dovi I learned a lot what our bike needs so for sure it will be helpful.”

Photos via MotoGP and Suzuki-Racing.com