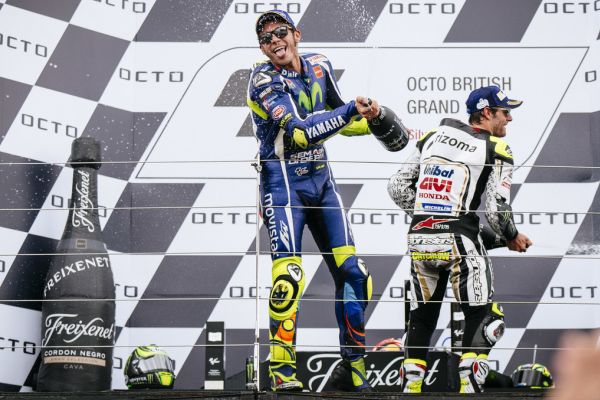 Valentino Rossi said that his battle with Marc Marquez was fair, even if Marquez does reserve “special treatment” for him.

The duo spent three laps in the closing stages of Sundays British MotoGP at Silverstone battling for the final podium position behind runaway leader Maverick Viñales and hometown hero Cal Crutchlow. The pair were swapping positions with aggression and skill in a passage of racing that wasn’t too dissimilar to the build up to the infamous incident in Sepang 11 months ago.

Despite the fallout from Sepang last year, Rossi said he had no obvious objection to the way Marquez rode during Sundays race. When asked if he was more worried when he was fighting with Andrea Iannone or Marquez, Rossi replied with the Spaniard.

“More when I have Marquez, because I know that he has special treatment with me,” said the nine-times World Champion who was celebrating his 250th Grand Prix start.

“But also with Iannone, it is not easy. Apart from the joke, it was a great battle with Iannone and also with Marquez. It is always a strong battle, but fair.

“Marquez is always very aggressive for sure, but compared to the Sepang battle this one was a lot different because both riders have the same target, try to arrive in front and try to go faster. This was the difference and I enjoy a lot.”

In the middle of the battle with Marquez, the Spaniard ran on through the first sector after almost touching Rossi. Whilst putting his hand up to acknowledge the mistake and not gaining any ground, Marquez certainly wasn’t ‘punished’ for making the mistake, as he slotted right back in behind Rossi.

Despite only taking three points of Marc Marquez, Rossi wasn’t disheartened by the result, instead saying that battles and races like that was why he continues to race, rather than solely hunting World Championships.

“I’m very happy, not for the three points because it’s still 50 points, but to arrive on the podium after a race like this, and a battle like this was very fun, very exciting,” said ‘the Doctor’.

“We already know that on the dry we suffer a bit. It was a difficult weekend and I know that I have to use the advantage to start in the front row and to fight from the first corner to the last.

“It was a great race, a great fight with Crutchlow, with Marquez especially and with Iannone. When I was fifth with Marquez in front and Iannone in front, I say difficult also because I had Pedrosa behind. I tried to not give up, to ride and at the limit. I was also lucky at the end but this is an important podium for me and for the team because I arrive on the podium after a difficult weekend.

“The only shame is that Maverick didn’t wait for us because we need to have this fight for the victory. But it was very fun.”