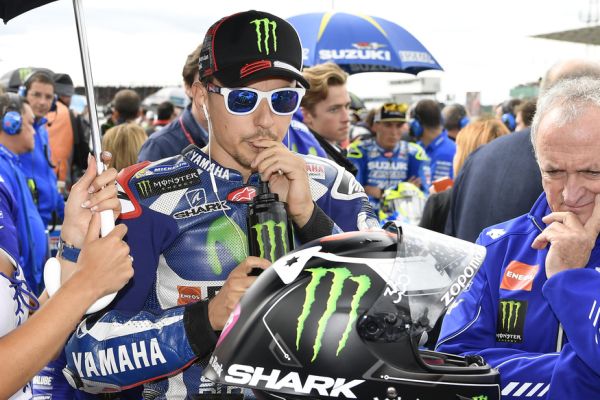 Reigning MotoGP World Champion admitted that today, he didn’t win the setup gamble he and his Movistar Yamaha team made for the British Grand Prix.

The World Champion was starting from the back of the third row after once again struggling with the wet conditions during qualifying. With damp conditions during morning warm up, Lorenzo admitted that he and his team took a gamble on their set up, without any proper dry running of this setting.

“We made some kind of gamble today with the setting,” said the Spaniard.

“We wanted to try it in the warm-up, but the track wasn’t dry. So we were discussing to put it or not to put it and we finally we made this gamble to put all the bike harder, all the suspensions, because we made it in the warm up, and it works.

“But today it didn’t work, it made the bumps even worse, and we also lose rear grip from the beginning I could see on the warm up lap we had less rear grip. And then in the first lap I saw when I was behind Pedrosa, I saw he had much more corner speed and much more drive and that it was going to be difficult.

“Some way, some how, I wasn’t in the group three. I was more or less keeping Dovizioso and the second group in my eyes, but more or less in the middle of the race, the last nine, I started feeling big degradation on the rear tyre similar to when you feel some pieces are gone from the tyre. I have to review statistically my pace. From three low to four, five-seven. This was then when Aleix passed me, I was losing way from the second group and from Aleix.

“Because (I had) less grip and because I didn’t know if the tyre was going to be worse and worse, I decided to be much slower to just finish the race in this bad position.”

Lorenzo pointed to the Michelin tyres as not absorbing the bumps as well as the Bridgestones have in previous years at Silverstone. He said that not only himself, but all of the Yamaha’s were struggling with the bumpy surface.

“In general the Yamaha this year, we’ve struggled so much on the bumps. Anyway, Valentino today had one or two tenths, or even three, faster than me and I was just losing one or two tenths every lap compared to the other group. Our setting today, we didn’t win the gamble. We made the bike worse, with less grip but the same vibrations over the bumps and finally I had the problem with the rear tyre,” he said.

With Marquez and Rossi putting more points into Lorenzo today, the Spaniard now sits 64 points behind Marquez with just six races remaining. When asked about the World Championship, Lorenzo said he was more focused on the short term and trying to make himself competitive again.

“I don’t care about the championship,” he said. “Because we are not competitive we are losing a lot of points, some way, some how something always happens to lose the points in the last two races. Lets see, in Misano, in the dry we are OK to be one of the fastest and fight for the victory and if it rains, to try and make another step forward.”

Despite another tough race, Lorenzo remained upbeat that he can turn it around and once again challenge at the front. He pointed to his pace in the dry at Brno as well as his pace on the Monday when the MotoGP bikes stayed for a testing day.

“Well I had the feeling in Brno that I was able to fight for the win, we had the better pace, not only in the weekend but also on the test on Monday. But it rains in the race. I improved my confidence a little bit in the rain, but we weren’t the fastest one, even if I was going to finish in third place. In Brno in the dry, we were prepared to fight for the win.

“Here, no. From the first practice we were slower than the other guys who had good pace. We decided to take a gamble on the race, because we couldn’t use the setting in the race what we used in the warm up. So this hard setting improved neither the bumps or increase the grip in the rear. There was a lot more spinning and the second group was driving much more on the exit of the corners.”