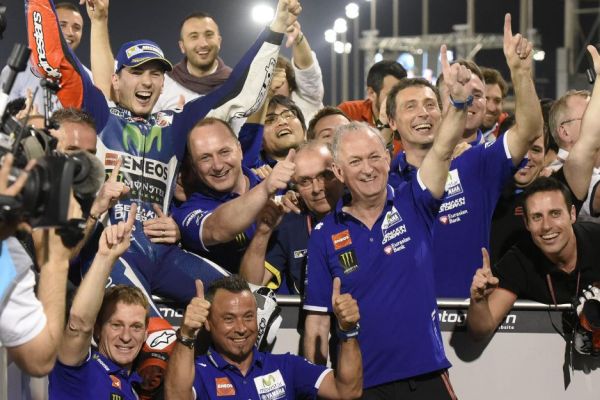 Qatar race winner Jorge Lorenzo was rewarded for a tyre gamble, as his soft rear tyre came to him later in the race, helping him gap the chasing pack.

Lorenzo was made to work for the first victory of 2016 under the floodlights at the Losail International Circuit in Qatar, but eventually he managed to pull away from Andrea Dovizioso, Marc Marquez and Valentino Rossi to win by just over two seconds.

This season the MotoGP grid have switched from Bridgestone to Michelin tyres, meaning teams are learning how the tyres will react with each circuit as they work there.

After a disappointing warm up, Lorenzo made a last minute decision on the grid to run the soft rear tyre, the opposite to what Marquez and Rossi chose. It was a risk that was heavily rewarded with the soft tyre getting stronger, allowing him to continue putting in fast laps until the end of the race.

“We made the decision to put on the soft rear tyre, because with the hard one we couldn’t be so fast. The harder compound should become better and better, but I think what happened was the opposite,” said the 28-year-old.

“The softer tyre should get worse and worse, but it was faster and faster so this little difference was the difference between me and Dovizioso and Marquez. I was surprised how fast my pace was towards the end of the race.

“I was sliding so much, but at the same time I was very smooth and concentrated and made no mistakes and that’s why even with the pressure from Dovizioso, when I was at a margin of 0.4, .03, 0.5, I didn’t get nervous and kept riding better and better.

“I feel very proud of my riding and my race and also the work of the team, because we put together the electronics and the setting of the bike in a very good way.”

Lorenzo has suffered misfortune in the opening round of the season for the past two years. After crashing out on the opening lap in 2014 and was faced with helmet issues last year. With no problems today, the World Champion was happy to get his title defence off in the perfect manner.

“It’s very important to start on the podium in the first race,” explained Lorenzo.

“In the past two years I didn’t. In 2014, I crashed out and get zero points, which was a terrible start. You don’t have the same quietness. Then again last year I finished off of the podium.

“To start winning is the perfect way and gives you more confidence. You’re calmer because you have already have an advantage in points over the other riders.”

With his title defence off in the perfect way, the Spaniard said that today’s race was one of the best of his whole career.

“For me, over all laps, this race has been one of the best of my whole career and that was why I was able to win and could make this little difference in the last three laps that gave me the victory,” he said.