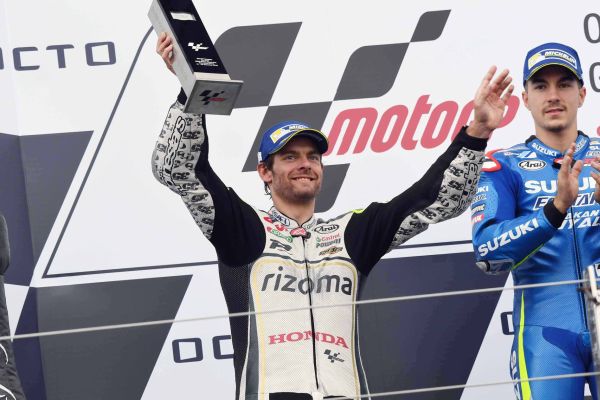 Cal Crutchlow admitted there was contact with both Marc Marquez and Valentino Rossi, but said that it was a fair fight en route to claiming his third podium in the last four races.

Crutchlow was starting him home Grand Prix from the pole position, just two weeks after winning his maiden MotoGP race in Brno. After a strong start, Crutchlow saw Maverick Viñales disappear up the road and claim his first MotoGP win, whilst he himself got involved in a race long battle with Marc Marquez and Valentino Rossi for the final two podium spots.

Crutchlow said there was contact with both Marquez and Rossi, but that it was all firm but fair racing.

“There was contact! He (Marquez) hit me at 200mph,” said Crutchlow.

“It was not his fault, I shot off. He didn’t mean to do it, but the wing hit me. It actually hurt, it dead-legged me. It then pushed me wide and I thought I have to make this corner and keep going because that was a move for then second.

“I told Vale, and this is no joke, I felt his fork leg or his wheel hit me in the head in turn 13. But I was unwilling to give it up. He was already alongside me and I thought if I give it up, then he’s going to screw me for the next left and somebody else is going to pass me, so I thought OK I’ll just stay there and in the left, I’ll try and get him back or I’ll stay there. But in the end I felt my head on something and I thought I’ve got to pick the bike up a little bit here!”

After coming out on top of a battle with Marquez and Rossi, Crutchlow was understandably delighted to claim a podium finish at his home Grand Prix. Whilst not saying it was better than his victory in Brno two weeks ago, Crutchlow did say that after a race long battle, this was maybe more satisfying.

“I mean it’s difficult to turn around and say it’s more satisfying than a win, because I don’t think it is as I’ve been waiting a long, long time to win a race. But, to be on the podium in front of your home crowd is a pretty special feeling, there’s no doubt about that,” he said.

“I worked hard for it, I had to battle. At one point I kept seeing plus .2, four riders and I was third and thought ‘oh come on’ as I thought it was going downhill. I could see the other guys were struggling and I felt OK. My problem was corner entry, I was sliding the back a lot on corner entry, but I dare not press any switches. I was like I have to just maintain it.

“We had a problem in one corner electronically. So we have to look at that later, because I was loosing three or four tenths in one corner. There seemed to be a big hole in the map that I haven’t had all weekend. We were, not lucky, but we had the red flag and we had to change something on the bike. They said it would’ve probably lasted fine, but you never know. So I was lucky to get back out and lead half of that first lap.

“The only reason Maverick passed me on that lap, I believe in that lap, was because I had a problem on the corner where I was having a problem. It would’ve been nice to be able to go with Maverick a little bit better at the start, but I didn’t take too many risks and Maverick had a great pace.

“But to finish second was good; I controlled it in the end. I had enough. I knew even when I was in that battle that I could still finish second. When Iannone came past, he was holding me up, when Marc was in front of me, he wasn’t doing anything special. There were points on the track where they were a little bit better, but there were more points where I was better.”

Tyres were always going to be an important decision today. With so much uncertainty over which tyre to run, Crutchlow said that he decided to mirror those on the front row and cover them off, rather than gamble with the softer tyres, much like Marquez did.

“We all knew that if Marc ran the K front tyre he would’ve been better than he was, there’s no doubt abut that. I don’t think he would have been Maverick today, I have to be honest. But he’s riding in a bit of a different way and at this circuit, maybe it doesn’t work as much,” said Crutchlow.

“He was riding well with the softer front tyre, but I also think, if I had the softer front tyre, I could’ve made it work. My fastest lap of the weekend was with the soft tyre. I just didn’t choose it for the race. I knew on the grid the two guys next to me were also a threat and I wanted to go with what they had. I knew I needed to get away with them. I felt comfortable.

“In some areas, like into turn 13 and turn 16 I was a little bit ragged now and then, but I had to make up some time.

“The funniest moment of the race was, I had one moment out of 16 where I nearly highsided. I was watching myself on the big screen and it was the exact time I was twisting the throttle and I thought, ‘that doesn’t look right’.”