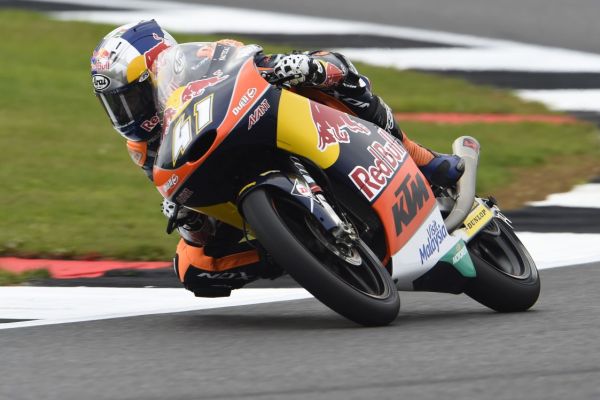 Brad Binder displayed exactly why he is the Moto3 World Champion elect, after a classy display at Silverstone to further extend his World Championship lead.

In a crazy race – even by Moto3 standards – Binder showed the skills he has demonstrated all season to keep his nose clean and stay out of trouble. Binder’s closest title challenger, Jorge Navarro, appeared to be not only doing a damage limitation from his poor qualifying, but had a genuine chance of winning. This was until Navarro crashed out in the closing stages of the Grand Prix after coming together with wilcard Stefano Manzi, who took a superb fourth position. With Navarro’s crash, Binder extended his Championship lead to 86 points over Navarro.

Behind Binder, Pecco Bagnaia backed up his pole position with another strong performance to claim yet another podium, and he was joined by a new podium finisher, Ducthman Bo Bendsnyder. Bendsnyder became the first Dutchman to stand on a Grand Prix podium since Wilco Zeelenberg did in 1994.

Binder now appears to have an insurmountable lead in the Moto3 World Championship, however behind him the race for second is heating up, with Navarro now just eight points ahead of Bagnaia, 16 ahead of Bastianini and 18 ahead of Bulega.