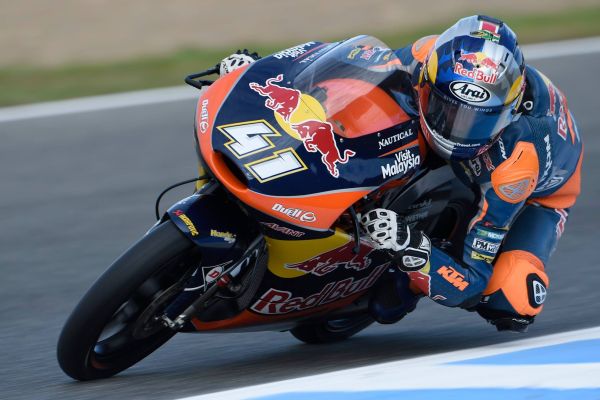 South African Brad Binder claimed his maiden Moto3 race is dramatic fashion after being relegated to last position ahead of the race, becoming the first South African to win a race since John Ekerold won the 350 race in Monza in 1981.

Binder had qualified in second place after Saturday’s qualifying session, however after his Red Bull KTM was found to be using an illegal map, he was relegated to the back of the grid after morning warm up.

Not deterred by having to start from the back of the grid, Binder worked his way through the field, catching the leading trio of Jorge Navarro, Pecco Bagnaia and pole-sitter Nicolo Bulega by half race distance. After taking his time and conserving his tyres, the World Championship leader eventually took the lead from Navarro into the dry sack corner at the end of the back straight with six laps remaining.

In winning his first race of his career Binder extended his World Championship lead over Navarro to 15 points.

Behind Binder, Bulega took his maiden Grand Prix podium after a heroic final lap and brave “Jerez” move into Lorenzo corner on the final lap, pipping out Mahindra’s Pecco Bagnaia and Spaniard Jorge Navarro who’ll feel aggrieved to have missed out on the podium after leading the majority of the race.

Behind the front four, Jakub Kornfeil produced a fantastic last lap to edge out Joan Mir and Fenati. Romano Fenati had held up as many as ten riders in the early phases of the race, before dropping off at the midway point of the race before finding his KTM come to him and ending in seventh place after an intense battle with Enea Bastianani and Jules Danilo with Phillip Oettl rounding out the top ten.

Binder’s victory is the first time a rider has won from the back of the grid since Marc Marquez managed to do so in his final Moto2 race at Valencia back in 2012.