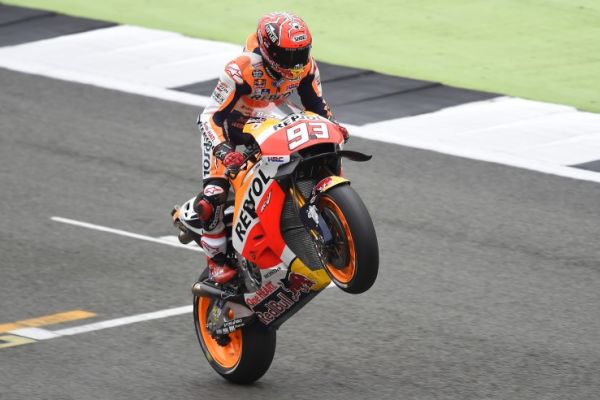 Marc Marquez has said that he has very good feeling around Silverstone in both the dry and the wet, despite crashing out of Q2 in the wet.

Marquez had lead the morning session and was considered a genuinely contender to take the pole position. However, whilst attempting to better Crutchlow’s best time, Marquez high-sided out of the qualifying session and will have to start tomorrow’s British Grand Prix from fifth position.

Marquez said the crash and the lack of pace in the wet were due to a small changes he and his team made to his Honda RC213V for the rain. However, the World Championship leader is confident with tomorrow’s race expected to be dry.

“My feeling was very good both in the dry and wet, but we implemented a small change to the setup for the rain that didn’t work as expected,” said Marquez.

“I went out in Q2 and couldn’t feel the rear tyre too much, nor did I have the confidence I had in FP4, but I decided to push and try to do a good lap.

“When I was about to do the next, final lap, I ended up crashing. Nevertheless, I’m pleased because in general the feeling was very good and we just need to return to the previous setup tomorrow.

“I want to take this opportunity to congratulate Toni Bou for his 20th Trial World Championship because it shows his ambition and the desire that he has to keep on winning. We also get along well personally, he’s an amazing guy and I’m very happy for him,” he said.