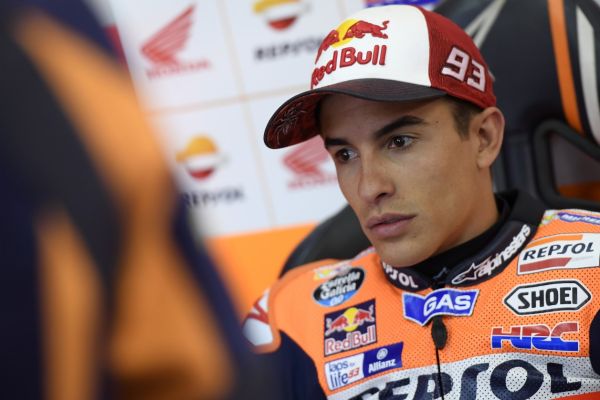 The Spaniard is currently leading reigning World Champion Jorge Lorenzo by 24 points in the World Championship standings, and with Lorenzo and his fellow Yamaha’s struggling on the opening day of proceedings in Saxony, Marquez will be hoping to extend his lead.

Marquez is unbeaten at the left hand heavy, German circuit for the past six years, and he ended the first day in third place overall, albeit six tenths of a second behind Viñales fastest time of the first day.

Despite being over a half of a second behind Viñales, Marquez was happy with his first days work in Germany.

“Today was a good day, although the way that it began was a little strange,” explained Marquez.

“In the first session we were only able to do a few laps because it started to rain slightly, but it wasn’t heavy enough to put on wet tyres. The second session was more-or-less normal, although there were low temperatures and a very cold track.

“We had to dial things back a little, especially at turn 11, where many riders crashed. Nevertheless, I felt quite comfortable with the bike. We want to improve on some points and have to keep working, because the forecast for tomorrow is that temperatures will improve slightly.

With rain currently forecast for Sunday, Marquez is prepared and ready for the rain to fall at any point over the next two days.

“It will be an interesting Grand Prix because of the weather, and the prediction is that on Sunday we’ll have a situation like today, when rain could fall at any time.”

Marquez’ time from today should be enough to see him advance straight through to Q2, where his main title rivals Jorge Lorenzo, Valentino Rossi and Dani Pedrosa will all have to improve their times in FP3 or will be forced to go through Q1.