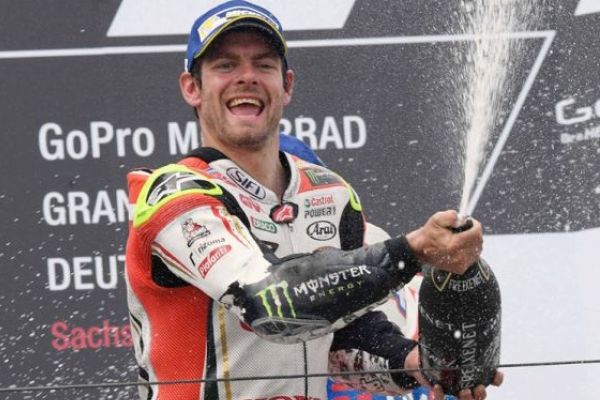 Britain’s Cal Crutchlow won his first ever MotoGP and Britain’s first in 35 years after a perfectly judged race in Brno.

Despite starting slowly, Crutchlow’s hard front and rear compound tyres came to the Brit after a third of the race, helping him slice through the field with ease, demonstrating patience to get past riders he was considerably faster than, knowing what he had to do to get to the front.

The early pace was set by the factory Ducati’s of Andrea Dovizioso and Andrea Iannone, along with Scott Redding, however their softer compound tyres started to fall apart – once they started to have issues with their tyres – the riders who have taken a gamble came to the fore.

Along with Crutchlow, Valentino Rossi, Loris Baz and Eugene Laverty started to find the gamble they’d taken come towards them as they had the pace and the rubber to keep pressing on as the track started to dry.

Despite claiming his first ever MotoGP win, the Brit said today wasn’t as special as his wife giving birth to the pair’s first child, a baby girl called Willow a couple of weeks ago.

“I expected a different feeling but after Lucy giving birth I had the best present a couple of weeks ago,” he said.

“I took the gamble. I don’t know if anyone else did this. As far as I’m concerned there all wimps. I’m so thankful for my team. That was a good way to repay them today.”

Behind Crutchlow, Rossi took four points out of third placed Marc Marquez in the World Championship standings after he also fought through the field after gambling with a harder rear tyre.

Loris Baz was fourth and passed his team mate in the final lap to give Avintia a 4-5 finish in what turned out to be the top two Ducati’s. Eugene Laverty was sixth coming through the field late finishing ahead of the higher spec’ed Ducati’s of Danilo Petrucci and Andrea Iannone – whose front tyre was dangerously worn at the end of the ace.

Maverick Viñales and Tito Rabat rounded out the top ten.

Reigning MotoGP World Champion Jorge Lorenzo will be asking serious questions of his team after being told to pit and change onto slick tyres the lap after posting the fast lap of the race on his hard rear tyre. The move didn’t work and he was back in two laps later, being lapped by the leaders.

Marquez’ lead at the top of the MotoGP World Championship is 53 points ahead of now second-placed Valentino Rossi.