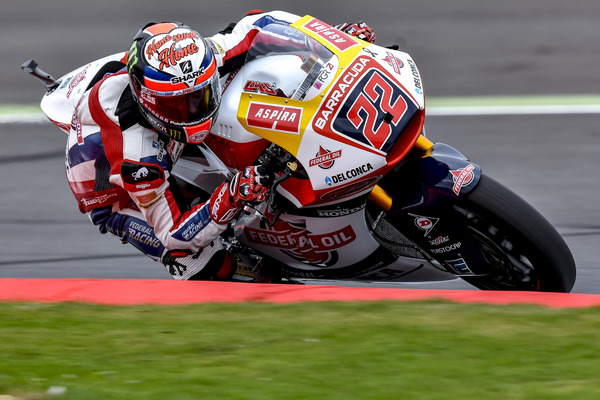 Sam Lowes will begin his home Grand Prix from pole position after a late charge snatched the pole out of Johann Zarco’s grasp in the final seconds of qualifying.

Lowes, who had topped all three previous Moto2 sessions this weekend looked as if he may have been left wanting when the rain came down and the fight for pole was on. However, with just one minute left on the clock, Lowes pulled out all the stops and claimed pole position with a time of 2:26.740.

Zarco had been leading for large portions of the session after taking the lead off of Alex Marquez, however, with only one lap to respond to Lowes’ time, Zarco crashed on the first corner of his final flying lap to allow the Brit to claim pole position. The duo will be joined on the front row by Zarco’s Monster Energy Tech3 Yamaha team-mate for 2017, Jonas Folger.

Alex Marquez will head the second row. After leading the early stages of the session, Marquez was bumped down to third before his final run. Less than a tenth off of the pace of Zarco, Marquez lost the front end of his Marc VDS Kalex going into the final corner, meaning he will start from the second row.

Marquez will be joined on the second row by Malaysian Hafiz Syahrin and team-mate Franco Morbidelli whilst Isaac Viñales, Lorenzo Baldassarri and Simone Corsi will make up the third row.

Moto2 title challenger Alex Rins will start down in 19th position as he continues to recover from his injured broken collarbone, which he picked up whilst training before the British Grand Prix.