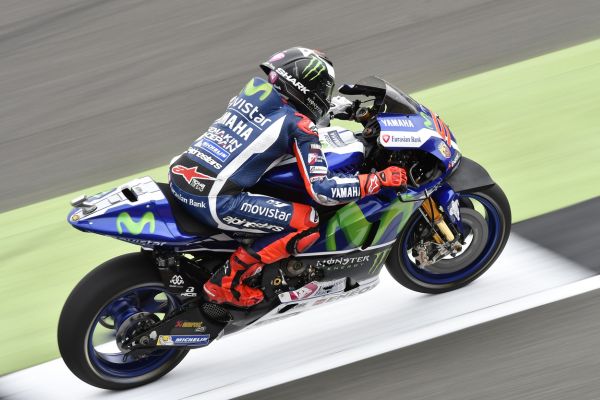 Reigning MotoGP World Champion Jorge Lorenzo has said that the new Michelin tyres and electronics package are making a noticeable difference at Silverstone this weekend.

The Spaniard ended the first day of free practice fourth fastest overall, albeit 0.6 behind Andrea Iannone who was fastest. Lorenzo spent over half of the session outside of the top ten, however a change of set up halfway through FP2 allowed him to jump safely into the top ten and avoid any potential danger of having to go through Q1 with rain forecast for tomorrow morning.

The added bumps on the track surface, combined with the new tyres and electronics package made it hard for Lorenzo to show the control and the dominance he has shown in previous years at Silverstone, especially with the track dry.

“The bike is acting differently compared to other years, because we’ve got the Michelin tyres and new electronics and it looks like, at this track particularly, it’s more difficult to improve the record of the track,” said Lorenzo. “We are trying something to especially better the turning of the bike and we are improving it.”

The World Champion will be hoping that the weather forecasters are wrong with rain forecast for tomorrows FP3 and qualifying sessions, however, with a starting spot in the top 12 almost guaranteed, Lorenzo will be focusing on Sunday’s race over any potential qualifying drama.

Lorenzo’s team-mate Valentino Rossi had been testing a new swingarm and chassis this weekend in Silverstone, however Lorenzo hadn’t been given either piece to test nor use this weekend by Yamaha, with him leaving for Ducati at the end of the 2016 season.