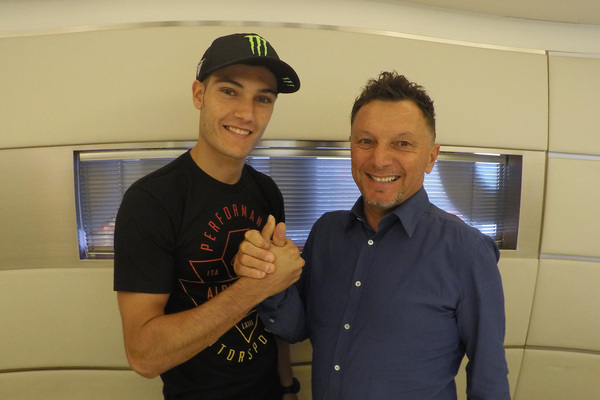 Moto3 front runner Jorge Navarro has been confirmed as Sam Lowes’ replacement in the Federal Oil Gresini Moto2 team for the next two seasons.

Navarro, who is currently second behind Brad Binder in the Moto3 World Championship standings will leave the Estrella Galicia 0,0 team after two seasons to take Aprilia bound Sam Lowes’ Kalex for the 2017 and 2018 seasons.

“I’m very happy and excited to have the opportunity to step up to the intermediate class of the World Championship with the Team Federal Oil Gresini Moto2,” said the 20-year-old.

“It’s an exciting challenge that I face with great enthusiasm. I would like to thank Federal Oil and Fausto Gresini for the trust they put in me, and for giving value to the work I’m currently doing in Moto3. I’m convinced that starting from next year we will do great things together.”

Team boss Fausto Gresini called Navarro one of the “most interesting young talents”, citing Navarro’s speed at learning as an appealing trait of the Spaniard.

“In 2017 we are determined to remain at the top and consequently, with Lowes who will step up to MotoGP, the choice fell on Jorge Navarro, undoubtedly one of the most interesting young talents of Moto3, with whom we signed a 2-year contract,” explained Gresini.

“Navarro proved to learn quickly, becoming a ‘big’ of the smaller displacement: we are convinced that he can fast adapt also to Moto2, a Championship where the level is currently very high. It will be an exciting challenge and we look forward to start working with Jorge, aware that we can offer to him a top team and a strong technical package, thanks to the support of Federal Oil.

“For this reason we are already organising some important testing sessions to prepare his debut in the best possible way.”

There had been rumours from some media that Romano Fenati was offered the seat, however GPxtra had only heard of Fenati being offered the Moto3 Gresini ride.