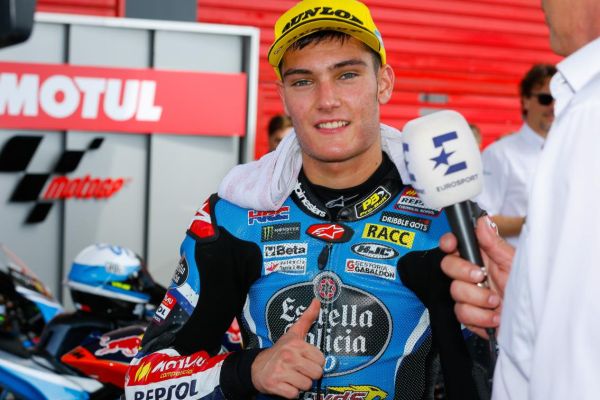 Moto3 front runner Jorge Navarro is closing in on a move into Moto2 as part of the Federal Oil Gresini team, replacing MotoGP bound Sam Lowes.

With the Brit ascending into MotoGP with Aprilia, Fausto Gresini is on the lookout for a new rider, and according to Spanish newspaper Marca, he has identified Jorge Navarro as that man.

The Spaniard has been vocal about his openness and willingness to move into Moto2 and the Italian appears ready to offer Navarro a bike capable of winning races in his first season in the intermediate class of Grand Prix racing.

In other Moto2 news, the Spanish daily also report that the Forward Racing team are facing the possibility of disbanding at the end of the 2016 season, due to financial issues. The cash strapped Forward team faced issues last year and had to withdraw their MotoGP team at the end of 2015, and unfortunately the Moto2 outfit may follow suit this year.

Despite having both Lorenzo Baldassarri and Luca Marini already confirmed for the 2017 season, should the Forward team end up disbanding, both riders will have options to remain in Moto2.

Luca Marini, half brother of the legendary MotoGP rider Valentino Rossi, has been linked with the currently unoccupied second seat in the Sky VR46 Moto2 team, replacing the troubled Romano Fenati alongside Pecco Bagnaia.

As for Baldassarri, the 19-year-old’s representatives have recently reached out to the Sito Pons’ Paginas Amarillas HP40 team, however they were knocked back after being told that they have also signed Fabio Quartararo to replace Suzuki-bound Alex Rins.

Baldassarri has also been in discussions with the Leopard team. Stefan Kiefer’s side have 2015 Moto3 World Champion Danny Kent confirmed for 2017, however his 2016 team mate, Miguel Oliveira, looks ready to join Brad Binder in the Ajo KTM Moto2 team, leaving a vacant seat next to Kent.