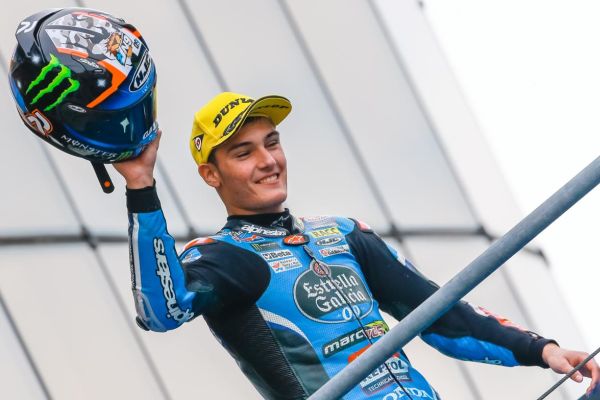 Moto3 World Championship contender Jorge Navarro has refused to rule out a switch into Moto2 for the 2017 season.

The Spaniard is currently sat second to Brad Binder, albeit 47 points behind the South African. After finally breaking his victory duck in Barcelona, the 20-year-old then suffered the misfortune of breaking both his tibia and fibula in a training accident close to home in Valencia.

Despite sitting out the Dutch Grand Prix in Assen, Navarro was back in action at the Sachsenring, despite requiring crutches to move around the paddock.

With Binder looking in prime position to claim the 2016 Moto3 crown, Navarro was widely expected to renew his contract with the Estrella Galicia 0,0 team for a third crack at the title.

However, the Spaniard has recently said he is looking at his options moving up from the Moto3 class and alongside Romano Fenati, Pecco Bagnaia and Brad Binder into the Moto2 class.

“I don’t know what team I will be a part of in 2017. It’s still very early to talk about it,” Navarro told German website Speedweek.com.

Navarro did say that he hasn’t had a concrete offer as of yet, but he did say there are indeed options, should he commit to rising into Moto2.

“It’s not yet certain. At the moment everything is still in limbo. Once I have time to relax and think about it, I will make my decision. There’s definitely an option in the Moto2 class for next season,” he said.

Despite being so far behind Binder and with half an eye on 2017, Navarro insists that this seasons title challenge isn’t over, saying that he can still fight for this season’s Moto3 World Championship.

“Yes, certainly. I still think everything is possible. I can still fight for the title,” said Navarro.