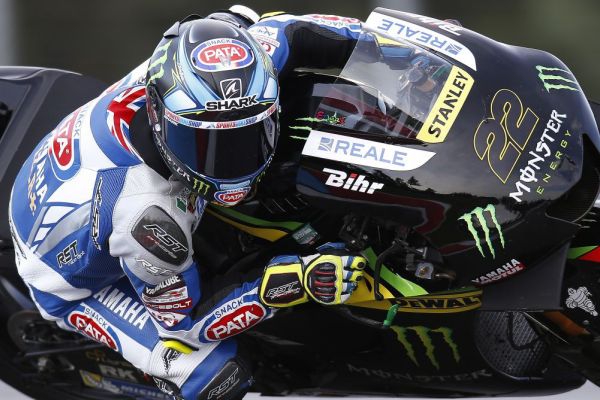 The Brit had to wait until the afternoon to swing his leg over Pol Espargaro’s YZR-M1, with the full-time MotoGP rider getting the majority of the laps, once the test get underway.

Once given his opportunity, Lowes completed 15 laps on the satellite Yamaha, clocking a best time of a 1:59.558, which was over a second faster than his first hot lap, and good enough for twelfth place in the final standings during the test.

Lowes test was unfortunately cut short, when he ran wide onto a less grippy part of the circuit and as a result, lost the front end of the Yamaha. Fortunately Lowes was unharmed and walked back into the pit box once taken into the pits.

Understandably beaming, Lowes was apologetic for his crash, although did call the experience a dream come true.

“Obviously this was one of the best days of my life! From when you’re a kid you dream about an opportunity to ride a MotoGP bike and it was fantastic,” Lowes said after the test.

“I didn’t do too many laps, but the feel of the bike was incredible. The power of the bike and the way that it turns was everything that I expected and even more than that, so it was an incredible experience.

“The crash was on my last couple of laps, nearly at the end of the day and obviously the reason was because I tried to push a bit too much without understanding everything. I broke a bit more and lifted the rear a bit, went a little wide and the track was a bit dirty and I lost he front. It was only a small crash but I’m feeling really sorry for that. Honestly, it was a fantastic experience and I really enjoyed it, even if I did only 15 laps, it were the best 15 laps I ever had.

“The YZR-M1 is so nimble and agile, it’s a big step compared to what I have been used to. I have no experience of anything like this before and the way you go from one side to the other, it’s like you are on a cycle bike, it is really easy. So many things felt a lot better for me but were also difficult to understand in the time, but it’s been great.”