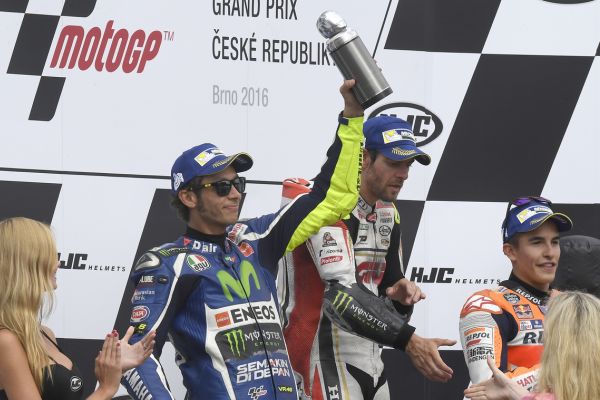 Czech Grand Prix runner up Valentino Rossi has said that he was worried he and his Movistar Yamaha team had made a mistake opting for the hard rear tyre at the start of the race.

Rossi was one of five riders to not opt for soft tyres on the front and rear, and as a result was slow in the early stages of the race. Starting on the outside of the second row, the Doctor dropped as low as 12th on the third lap, however the track and the tyres then started coming to the Italian.

A combination of his tyres coming toward him and opponents starting to struggle with their tyres meant that Rossi was starting to pick up places quickly moving through the field. When he passed Iannone to go second, he consolidated what he had, and decided to settle for second place.

“At the beginning I was desperate because I thought we made a mistake, but lap by lap the hard rear became better and it was a very long race, you have to stay concentrated not to make a mistake,” said the 37-year-old.

Despite not winning the race, Rossi was happy to finish ahead of his two title rivals Marc Marquez and team-mate Jorge Lorenzo, moving into second in the World Championship in the process, albeit 53 points behind the Spaniard.

“I started from P12, so it was a great race and I’m happy with these 20 points, also because I’m second in the championship and I think today we did a good job and we made the right choice.”