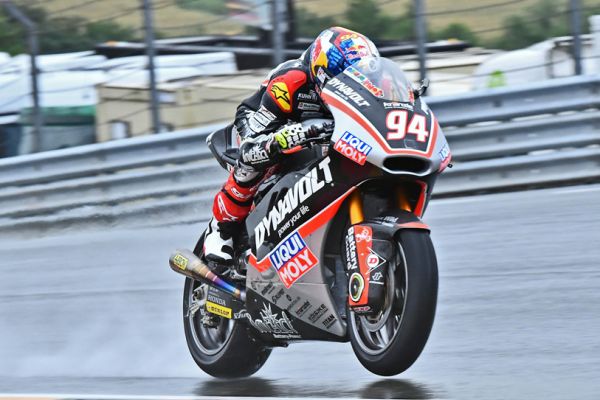 Jonas Folger rode a perfect race from the off, leading the entire race on his way to winning his first Moto2 race of the season.

After topping the morning warm up, the German got a strong start off the line and after leading the race into turn three, the Folger wouldn’t relinquish the lead. Folger managed the gap back to second place Alex Rins perfectly, despite some uncharacteristically erratic riding from the Spaniard, Folger didn’t once look troubled.

The German who will ascend into MotoGP next year as part of the Tech3 team said that the he tried to escape at the front to avoid a lot of the potential drama behind.

“I tried to pull away at the beginning,” he said.

“I had pace on new tyres and knew everyone that was crashing at the Sachsenring would be more careful. I had to pull away from Rins, go to the limit, but finally I was able to get the win.”

Rins’ second place and Moto2 World Champion Johann Zarco’s awful race saw the gap at the top of the World Championship standings to just 19 points. Behind Rins, Sam Lowes claimed a podium ahead of his home Grand Prix at Silverstone next time out.

Mattia Pasini was involved in a last lap clash with a late charging Sandro Cortese, with the German crashing out, whilst Alex Marquez capped a strong weekend with an impressive fifth position. Hafiz Syharin, Danny Kent, Franco Morbidelli and wildcarding Ant West rounded out the top ten, whilst Zarco could only manage eleventh place.