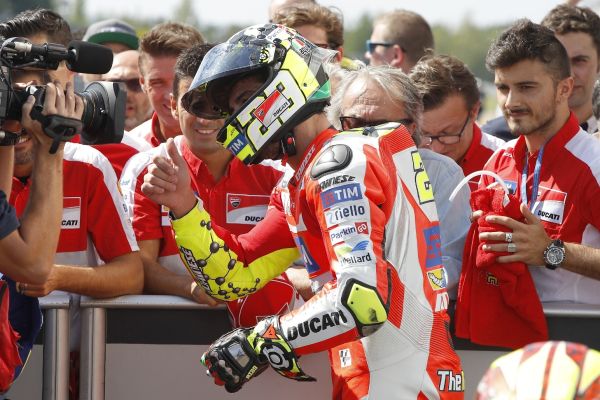 Andrea Iannone admitted that he was surprised with this his pace in Brno, as he will start tomorrow’s Czech Grand Prix on the outside of the front row.

After dominating last weekends Austrian Grand Prix, Iannone and Ducati knew that this Czech circuit was going to be a lot of challenging for them. Despite appearing high in the timing screens, the Italian has been focusing on his race pace rather than that of his single lap pace.

In spite of his focus behind on pace over 22 and not one lap, Iannone did still manage to post a time good enough to earn him third position on the grid. Whilst Marquez and Lorenzo were battling it out lap records, Iannone posted a 1:55.227 which was 0.631 behind Marquez’ lap record.

Iannone admitted he didn’t expect to be as fast as he was, and is quietly confident he can challenge for a podium over the 22 laps tomorrow.

“It was a very difficult qualifying session because we knew that we would struggle to put in a good performance over one lap, but in the end we managed to get something better than expected,” said Iannone.

“Here at Brno we are able to be more effective over race pace that over one lap. In any case we have worked really well during the weekend, because we’ve always been first or second in every session, and I am really satisfied.

“For sure the race will be tougher than in Austria, but I believe that tomorrow we’ll be up in the group that will be fighting for the podium.”