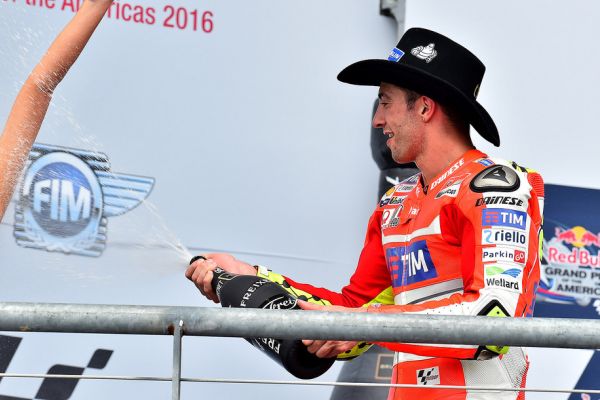 Andrea Iannone claimed his first podium of 2016 at the Circuit of the Americas last weekend, and it couldn’t have come at a better time on the back of four consecutive DNF’s.

After the drama of Argentina seven days earlier, Iannone would’ve been hoping for a quiet race in Texas and that’s exactly what he got, finishing five seconds behind second place Jorge Lorenzo and seven seconds ahead of Suzuki’s Maverick Viñales.

Iannone started the Grand Prix of the Americas from seventh place, serving his three position penalty for causing the crash in Termas de Rio last week, however this week he was the beneficiary of more misfortune to his team-mate. This time it was Dani Pedrosa, ironically the man who was promoted into third position after Iannone’s suicide move last week, who smashing into the side of Dovizioso this week, promoting Iannone to third place.

With Jorge Lorenzo expected to officially announce his move to Ducati next time out in Jerez, Iannone knew it was important to finally get some points on the board in Austin.

“It was really important for me to finish on the podium today, but more than anything else to finish this race with a good result,” said Iannone. I was sorry I was demoted one row on the grid and in addition, at the start, I made contact with Dani and Aleix and lost a few places.”

Iannone was happy with the race pace of his Desmosedici, suggesting he believes he could’ve challenged Lorenzo for second place had he not started from the third row of the grid.

“In the race however I was very constant and always lapped with a good pace, very close to Jorge’s, and if I had started well, maybe I could even have fought it out for second place,” he said.

“In any case I am pleased with the way the GP went and I’d like to dedicate this podium to Ducati and to all the team because I made them suffer in the first two races and I hope that this result repays them for the commitment and the work that they are doing for me.”