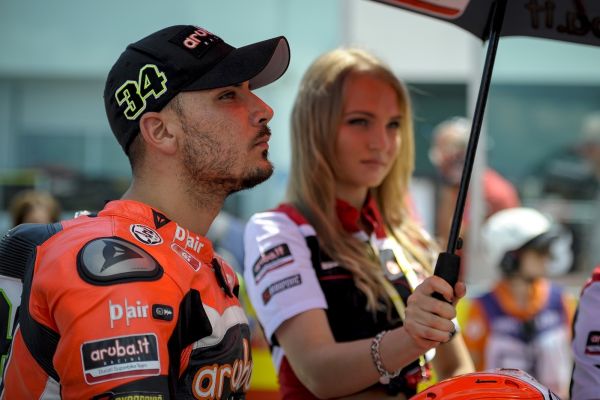 Aruba Factory Ducati’s Davide Giugliano is open to a switch from the World Superbike paddock to Moto2 in 2017.

The Italian is currently enjoying his best season in the World Superbike class since moving into WSBK in 2012 and he is sat in fourth in the overall standings level on points with Honda’s Michael Van Der Mark and 75 points behind his team-mate Chaz Davies.

Despite 2016 being Guigliano’s most successful season in World Superbikes, Ducati will not be renewing the contract of the Italian, instead deciding to keep hold his experienced team-mate. There had been talk that Ducati were hoping to sign Aleix Espargaro, Eugene Laverty or Van Der Mark, although it now appears as though they will be providing Marco Melandri with a return to World Superbikes.

After being told that he was going to be losing one of the best rides in the paddock, Guigliano doesn’t know if he wants to remain in World Superbikes, or to try his luck in the Grand Prix paddock.

“I don’t like to talk until I’ve got something concrete,” Giugliano said speaking to Italian website GPone.com.

“I’m speaking with some top teams in Superbike, but I also wouldn’t mind moving to Moto2, a championship that I think is very interesting. It wouldn’t be easy of course. A change of category never is, and the Superbike paddock is my home, but I hope to have more to say within a couple of weeks.”

Whilst looking forward into 2017 and onwards, Giugliano did admit that he didn’t take the news of his contract at Ducati not being renewed all that well.

“Let’s say I didn’t take it too well,” he said. “The market started moving between Aragon and Assen, right when I was having my most difficult time, but then I recovered and since Malaysia I’ve scored more points than Davies.”