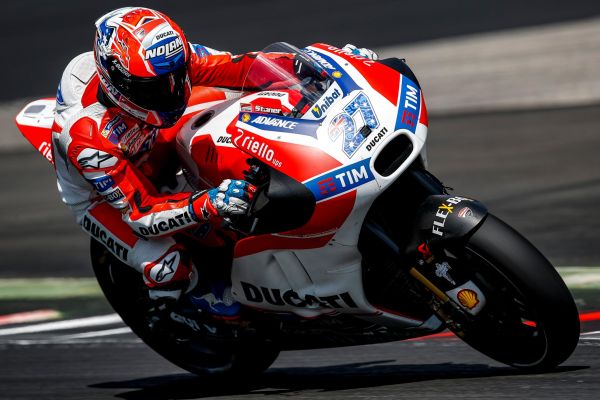 Stoner was back in action this past week, in his role as tester for the factory Ducati team, where he was testing alongside the full time factory Ducati riders as well as reigning World Champion Jorge Lorenzo and former nemesis Valentino Rossi, finishing the two days as the third fastest rider overall, just behind the two factory bikes of Andrea Iannone and Andrea Dovizioso.

Despite Danilo Petrucci’s claims that Stoner wanted to race in Austria and would do if he was competitive at the private test, Spanish newspaper AS claim that sources close to the situation insist that Stoner continues to stand by his initial statement that he wasn’t looking to return and race.

It is not clear whether Stoner’s crash late on day two had any barring on his decision. Whilst walking away from the crash unscathed, the Australian suffered his first crash as a MotoGP tester. “It was the first time I had to push in four years with a soft tyre and it didn’t go well,” he said.

This is not the first time that Stoner has spurred the opportunity to race this season for Ducati. The 30-year-old had the option of standing in for the injured Danilo Petrucci as part of the Pramac team, for the opening three rounds of the MotoGP season, including two circuits he previously requested to wildcard at with Honda (Circuit of the Americas and Termas de Rio Hondo).

It is doubtful that this will end the rumours of a potential wildcard for Stoner with his home Grand Prix yet to come on the calendar. Ducati’s last win came six years ago when Stoner, then a full time factory Ducati rider, won his fourth of six straight home Grand Prix at Phillip Island. We can expect rumours to once again pick up when the paddock heads down to Australia in October.