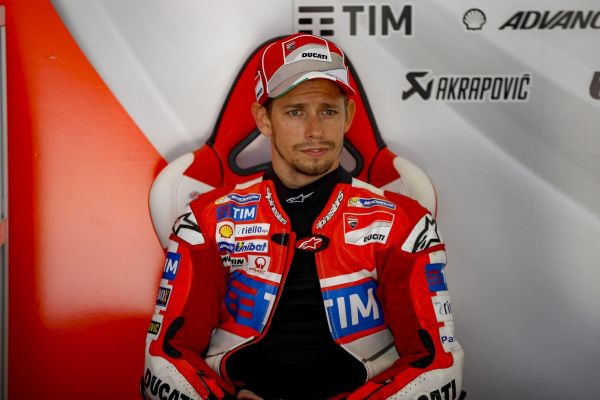 Former two-time MotoGP World Champion concluded his latest test aboard the Ducati Desmosedici with a small crash at the Red Bull Ring in Austria.

Stoner has been on track with the MotoGP field for the second time since joining Ducati in a testing role. The Australian ended the two day test as the third fastest rider overall, right on the tail of the two factory Ducati riders Andrea Iannone and Andrea Dovizioso. The former double World Champions second day of testing was limited due to the test team running Michele Pirro for some laps in the afternoon, limiting him to laps early in the morning and late in the evening. In spite of the limited action on the second day, the 30-year-old was happy with the work he did on different chassis’ and working on brake balance.

“We had quite a positive day but really didn’t get a lot of laps in because the Test Team had to put Michele Pirro on the bike to do some testing this afternoon,” said the Australian.

“We did lots of short runs to change the bike all the time, did a couple of comparisons in the chassis, and we adjusted and moved everything around a bit to get the bike more stable under brakes on a good track.”

Stoner suffered the small crash right at the end of the day as he was pushing on the softer tyre in a bid to post one final quick lap before the chequered flag dropped on the test, joking it was the first time he pushed in four years with a soft tyre.

“I’m happy and satisfied but also a bit disappointed towards the end because it was the first time I had to push in four years with a soft tyre and it didn’t go well as I crashed at turn six,” he said.

“I’m pretty happy with the hard tyre, and the bike felt good, even though in both days we were still using the previous chassis, but I think we can lap even better with the new version.” Stoner has previously said that he has nothing confirmed with Ducati yet, whether that be any potential wildcard appearances or further tests.