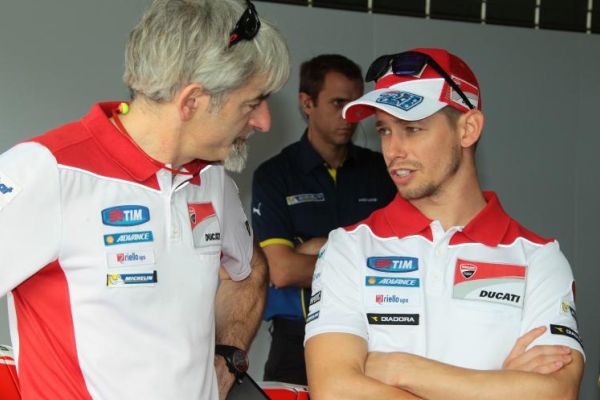 Former double World Champion Casey Stoner made his official return to Ducati earlier today, as he begins a two-day private test at the Sepang International Circuit in Malaysia.

The Australian who is returning to Ducati after a five year absence, which saw him win his second MotoGP World Championship before retiring at the end of the following season, has returned to Ducati in a predominately testing role, with the carrot of some wildcard appearances dangling tantalisingly.

Stoner took to the track this morning, and spent his entire first day back on the Desmosedici on last years GP15. The bike was equipped with the new Michelin race tyres and Magneti Marelli standard electronics package.

The 30-year-old is officially riding again tomorrow, although rumours from Sepang suggested he could also feature at times during the first official MotoGP pre-season test of 2016 which is due to get underway on Monday 1st February, aiding factory Ducati duo Andrea Iannone and Andrea Dovizioso.

No official times have been leaked from the test yet, although Sky Sports in Italy are reporting that Stoner managed a best time of a 2’02.1 which is just over two seconds off the best time managed by a Ducati around the circuit last October. When the new tyres and electronics are factored in, that is extremely encouraging signs for Ducati.

Despite insisting that he has no plans to return to a full-time ride in MotoGP, Stoner did admit it was emotional as he made his ‘race track’ return to Ducati, earlier today.

“The whole build-up to this test, it definitely means something. Meeting everybody, the new people in the department and meeting up with old friends again. It’s been a lot of nice emotions,” the 2007 World Champion told members of the media in Sepang.

“It’s been a very successful day today to be honest. For the first time working with everybody and seeing how they go about things, there was the utmost professionalism and everybody has been working really well. In those first laps I didn’t expect to be so comfortable with the bike so quickly. You can definitely feel that it’s got some grunt. It’s powerful. You can feel the good points and some points that need to be worked on, like any machine.

“It’s been very successful as far as it goes and moving forward to the point where I can really give them feedback already, by the end of the first day. Normally that’s quite difficult to do until you are really comfortable. But in my opinion it’s been a very successful first day.”

One thought on “Casey Stoner makes Ducati return in Malaysia”