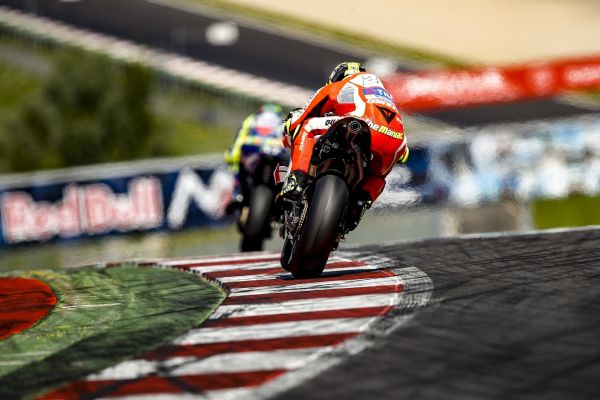 Italian rider Andrea Iannone ended the second day at the Red Bull Ring as the fastest rider, ahead of next months Austrian Grand Prix.

Iannone ended the day with a best time of a 1:23.240, good enough to lead the test by four tenths of a second ahead of his team-mate Andrea Dovizioso.

Ducati enjoyed a very successful test, topping both days of the timing, and having over three quarters of a second in hand over the next best bike (Valentino Rossi’s Yamaha) thanks in no small part to the long straights and areas of acceleration. The Desmosedici is suited to the Spielberg circuit with long parts of the track requiring the riding to have the bike at full throttle for large portions of the lap.

“It was a very positive test. I am happy that we finished it in this way with the best time, because in the two days we always lapped very quickly and we worked very well,” said Iannone after the two day test concluded.

As well as getting used to the Austrian circuit, Iannone and Ducati were working hard with a new chassis yesterday, before spending time today working on new set-ups in a bid to maximise the potential of the Desmosedici.

“Yesterday we tried for the first time the new chassis, which gave me some very positive sensations,”he said.

“Today we focused on working on some different bike set-up solutions, with good results and I can say that a result like this is the best possible way to go on holiday!”