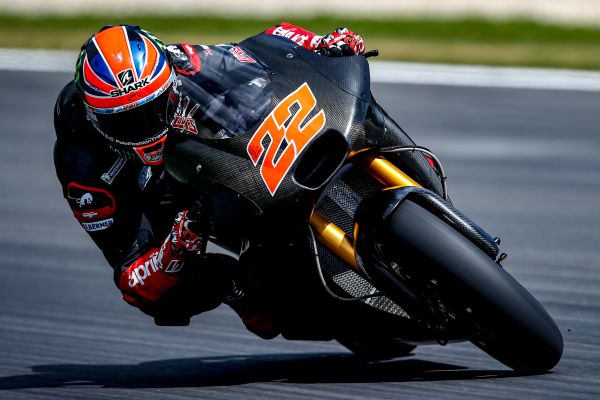 Moto2 front runner Sam Lowes got his second taste of the Aprilia MotoGP machine during this weeks private test at the Red Bull Ring in Austria.

The Brit made his debut on the RS-GP earlier in July when he tested the bike in Misano, where he lapped over a second faster than full-time test rider Mike Di Meglio and just over half a second behind Casey Stoner around the same circuit.

Lowes joined Di Meglio and Alvaro Bautista (Bradl was forced to sit out after getting concussed during this past weekends German Grand Prix) where he went through a testing programme for the RS-GP testing a new swingarm and working further with the electronics, whilst continuing to adapt and learn about the MotoGP machine he will find himself on in 2017.

Lowes’ RS-GP didn’t have a transponder fitted to it, meaning that there were no lap times were released for Lowes, although he did manage to complete 57 laps during his first and only day of testing at the Red Bull Ring.

The Gresini rider said that he is already feeling more comfortable on the Aprilia, and that he was improving every time he went out on track.

“After the first contact in Misano, I’m beginning to feel more and more at ease astride the RS-GP,” said the 25-year-old.

“It is a positive trend. I improved every time I went out and we began to work on the bike setup to adapt it to my riding style.

“The track is very nice. There are some tight corners and flowing sections. Overall it’s fun. It isn’t very difficult to learn; you just have to remember the right reference points on the blind corners. Let’s just say that, after riding the RS-GP, the straight stretches will seem even longer with the Moto2 bike.”

Lowes also confirmed that he has more tests planned with Aprilia, ahead of his move into the team full-time in 2017.

“We have more tests scheduled with Aprilia, but at the moment I am pleased with the level we have achieved,” he said.