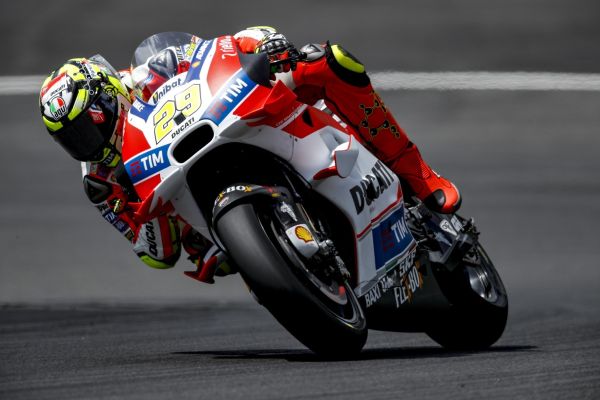 Andrea Iannone continued Ducati’s domination at the Red Bull Ring where he head his team-mate and Casey Stoner, as the top four were all Ducati’s.

Whilst LCR’s Cal Crutchlow spent time atop the timing sheets early in both the morning and afternoon sessions, before the factory Ducati boys swapped best lap times, before Iannone ultimately smashed Dovizioso and Stoners best times with a 1:23.240, half a second faster than Dovizioso’s best time from yesterday.

Behind Iannone, Dovizioso and Stoner, Avintia’s Hector Barbera was fourth fastest, ahead of the Movistar Yamaha duo. Valentino Rossi finished fifth, just ahead of his team-mate by just 0.025 seconds with the Yamaha duo expecting a rough weekend in three weeks time.

Behind the factory Yamaha’s were the two Ecstar factory Suzuki’s. Maverick Viñales – who spoke yesterday about how Suzuki are expecting to struggle with a lack of acceleration – just ahead of his team-mate in seventh and eighth.

Casey Stoner suffered a small crash at turn six at the end of the day, losing the front end of his Desmosedici. Fortunately the Australian walked away from the crash unharmed. Stoner doesn’t currently have any more tests planned with the Ducati team, although there have been rumours of a potential wildcard at the Red Bull Ring in three weeks time.

The MotoGP paddock will now take a well earned break before all joining up at the Red Bull Ring in three weeks time.