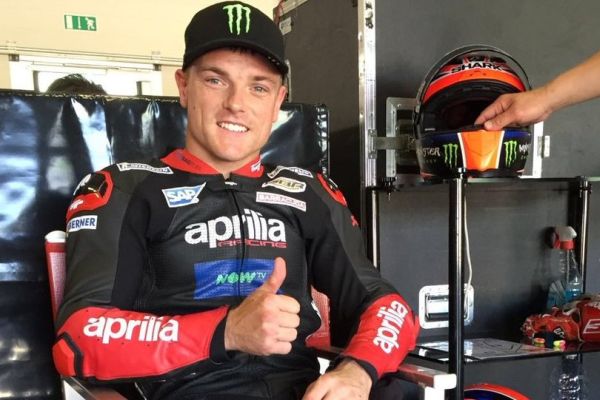 Moto2 front runner Sam Lowes got his first taste of a MotoGP machine today in Misano as he began a two-day private test with the factory Aprilia team, who he will ride for next season.

The Brit finds himself just five points behind both Alex Rins and reigning World Champion Johann Zarco at the head of the Moto2 field, however the  25-year-old was today focused on the next step in his career, testing the RS-GP.

Lowes signed a three-year contract with Gresini for 2015 through 2018, which would see him complete one season in Moto2 as part of the Federal Oil team aboard a Kalex, before eventually making the jump in 2017 to the factory Aprilia machine.

Lowes has never tested a MotoGP machine before, however the 2013 World Supersport Champion was pleased with his first day aboard his new machine. No times were released from the private test, however Lowes was in a good mood after the first day of testing.

He will continue the test tomorrow, sharing the track with Ducati’s Casey Stoner before turning his attention back to Moto2 with the Sachsenring in just over two weeks time.

One of the most enjoyable days of my life! School day one! #Aprilia #Gresini #bearacer absolutely loved it!!! #stepbystep #futureisbright