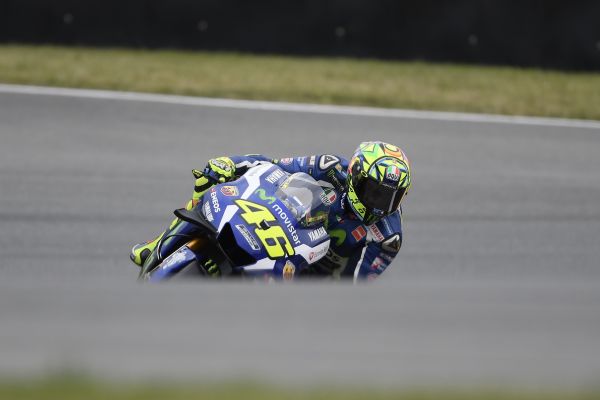 Valentino Rossi will have to deliver during tomorrow mornings FP3 session to avoid having to navigate Q1 tomorrow afternoon.

The Doctor found himself in a very solid fourth position after this morning’s rain-shortened FP1. However, during the drier FP2 session, the nine-times World Champion found himself stuck in traffic, preventing him from posting a quick lap.

Whilst the single quick lap should come tomorrow morning, Rossi admitted that he and his fellow Yamaha riders were struggling to generate temperature in the front end of the bike, therefore leaving him with a lack of feeling from the front of his YZF-M1.

“Also the softer option is a bit too hard and we don’t have the feeling or enough confidence to push to the fullest.”

With a lack of feeling from the front of his bike, Rossi held back, although he did admit he was a little surprised to see himself down in fourteenth position, and over 1.3 seconds behind the fastest time of the session, posted by Ecstar Suzuki’s Maverick Viñales.

“This afternoon I also had another problem: I was stuck in traffic and wasn’t able to do the lap at 100% and in fact I’m very far behind, so we hope for tomorrow and Sunday to have a better temperature and a little bit more sun. that can help us a lot,” he said.