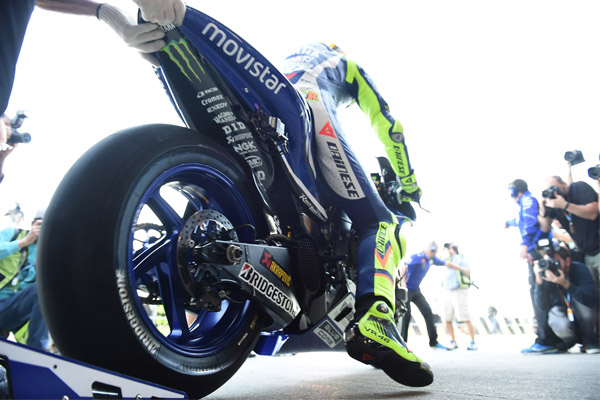 World Championship leader Valentino Rossi was happy with his first days work, despite only ending the day fifth fastest.

Rossi ended the day +0.364 behind his team-mate and title rival, Jorge Lorenzo, whom he holds a slender seven point leader over Lorenzo who found himself in first position. With the added complication of his grid penalty to be added onto wherever he ends up qualifying Rossi would be forgiven for sounding downbeat when speaking to the gathered media inside the Movistar Yamaha tent after FP2, however the Doctor was in good spirits.

“I’m quite happy. I’m quite satisfied about this Friday because we started well from the morning and we worked especially well during the practice and I was able to improve my lap time every stint,” said the 36-year-old.

“Also with the used tyre, here that is very important considering the long race and the tyre slides a lot. We continued in a good direction in the afternoon, I was more competitive than the morning and I was able to improve my lap time.

“We decided to work also with the hard tyre and I was strong, I felt good with the bike and I make some good lap times. So it can be an option for the race, especially because starting from last I have to go fast for 30 laps to try to recover.

“At the end we did a comparison with the soft tyre which is for sure a bit faster and easier, especially in the first laps. The difference is not so big, but you can go a bit faster, so we need to decide which way forward. But in general I’m happy because I rode well, I feel good with the bike and for the first day it is a good performance already, with some good lap times. We’ll try to continue like this tomorrow.”

Despite being forced to start from the rear of the field, Rossi will still be able to take part in Q2 should he find himself inside the top ten at the end of FP3. With him not being able to start from pole, even if he finds himself top of the timing sheets after the fifteen minute session, Rossi knows he must approach the session in a different way to usual.

“We will speak with the team but at this moment I think [I’ll do] a normal qualifying because it’s very difficult to use the Q2 to make a lot of laps, like a race simulation, because there will be a lot of traffic.”

The Italian knows he will face traffic however. Being stuck at the rear of the field, he will spend parts of his Sunday afternoon stuck in traffic. He knows the tight, tricky Circuit Ricardo Tormo isn’t one place you want to be fighting through the field.

“Everything depends on my pace, if I’m ok and we work well on the setting, can be less difficult,” he said.

“But Valencia is a difficult place to recover because it’s quite narrow and also on the straight we are not very fast. We don’t have a very high speed. So we need to understand some other points for overtaking and we need a good setting for braking into the corners.”