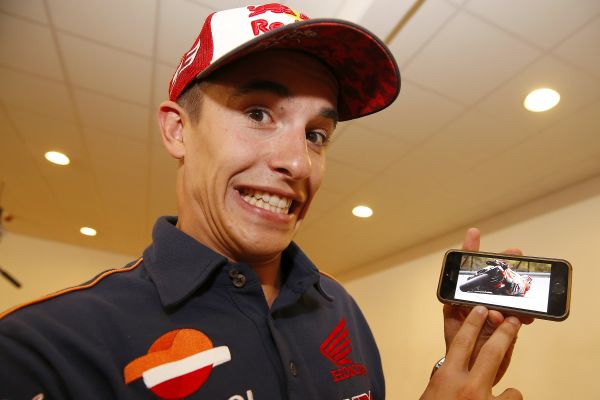 The Spaniard was only sixth fastest during the morning session, after having his fastest lap of the session cancelled retrospectively by Race Direction for running wide at turn 14. However, Marquez set to work in the afternoon session, ending the session fastest overall with a lap time of 1’55.840, which was just over a tenth faster than second place Andrea Iannone.

Despite ending the day fastest, Marquez said that he still wasn’t where he wanted to be with his RC213V and that he will look to improve on his pace further tomorrow morning ahead of qualifying and Sunday’s race.

“Today was a positive day because we were able to improve significantly from the first to the second session,” said the two-time MotoGP World Champion.

“We’re still not where we would like to be, and although the position is good, the important thing is to work with the race in mind. In this respect, Jorge [Lorenzo] and Valentino [Rossi] have a very steady pace. We’ve been trying out many things, especially this afternoon, and now we have to assess what worked better for us and what we must continue looking at.”

As well as topping the timing sheets, the big moment in Marquez’ day saw him save a surefire crash on his knee as he entered the final two corners in typical Marquez fashion. Marquez compared it to his save or crash photo from 2014, as he went around the right hander at over 67 degrees.

“In the afternoon we were a bit lucky to save a possible crash similar to one I had in 2014 at this same track during a testing session,” he said.

“This one was even bigger because it was very long and my lean angle was about 67.5 degrees. I just lost the front and when I saved it I told myself, Okay, let’s go back to the box to cool down a bit, because I was a little bit excited. It means that we’re pushing hard to find our pace.

Marc Marquez continues to defy the laws of physics! You have to see this to believe it! https://t.co/UhuXeimOSq

“Tomorrow we’ll see if we can take another step forward, especially in terms of race pace, to be able to aim for the podium on Sunday. If we do that, then why shouldn’t we target the victory too?”