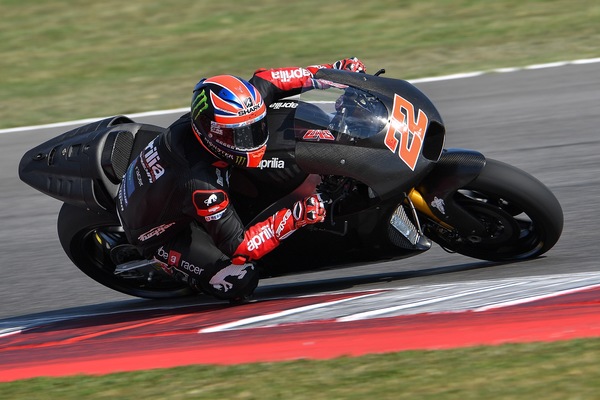 Sam Lowes has completed his two-day test with the factory Aprilia team in Misano, ahead of his move into the premier class next season.

Lowes was in action yesterday where he completed 60 laps, tasting the power of the RS-GP for the first time, along with the new Michelin tyres and carbon brakes, before clocking another 69 laps in Rimini today.

Joined on track by Aprilia’s full time test rider Mike Di Meglio, Lowes and Di Meglio, the duo were continuing to work with the new parts constantly being produced from the factory in Noale, including new chassis components and electronics management strategies.

Despite now shifting his attention back to the Moto2 World Championship, where he trails Johann Zarco and Alex Rins by just five points in the World Championship standings, the Brit said that he would never forget his first laps on the Aprilia MotoGP machine.

“My first laps on the Aprilia RS-GP were an experience that I’ll never forget,” said the 25-year-old. “When I twisted the throttle the speed I could feel was incredible. It was a brilliant feeling.

“On the second run, I had already begun to manage the power better and I tried to understand how to take the best advantage of it. There were a lot of new things to discover and they all astonished me.

“The first ones were definitely the power and speed, and then the carbon brakes. The third is the seamless gearbox, which is really incredible, and the fourth is obviously the electronics, which I felt comfortable with straight away.”

Lowes went on to say that he was surprised at how agile he found the bike, expecting the bike to be a lot more difficult to ride, Lowes was pleased with how comfortable he felt.

“And then the RS-GP surprised me with an agility that I hadn’t expected, so much that the night before the test I was quite nervous because I was imagining a much harder bike to ride, but that’s not at all the way it was, although nothing is easy on a MotoGP bike. Last, but not least, I want to emphasise how comfortable I felt working with the entire team. In short, it just went really well.”

Aprilia haven’t released any times from the test, although Aprilia Racing Manager Romano Albesiano was suitably impressed with how quickly Lowes adapted himself to a bike he had never ridden before yesterday morning.

“It went well,” Albesiano said. “I’d say that we could not have had a better start. Sam got on a bike that he had never seen before, having to deal with a series of new features that range from the available power to the carbon brakes. He was at ease straight away and he also proved to be very analytical and precise in the indications he gave the team, as well as with his work method.

“Naturally, we were not looking at times, but even from this point of view we are quite pleased with these two days. We continued the RS-GP development programme with Mike, focusing specifically on the new chassis parts and working on the electronics, especially in terms of torque output.

“We will obviously be taking every solution that proved to be effective to the races straight away.”