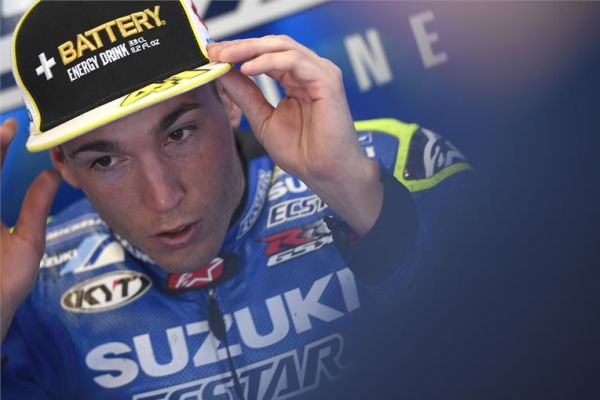 Suzuki Factory rider Aleix Espargaro has confirmed he has offers from both Aprilia and the World Superbike paddock for 2017 as it looks increasingly likely he will leave the Japanese factory.

In Mugello Suzuki confirmed that they had secured the signing of Italian Andrea Iannone to replace Yamaha-bound Maverick Viñales. When asked about the signing Aleix was very vocal and upset that Suzuki hadn’t spoken to him or already had his future tied up before signing a new rider.

With the confirmation of his brothers move to the factory KTM team for 2017, Aleix’s options are limited should he elect to move on from Suzuki.

One factory team that are still looking for a second rider are the Aprilia team. The Italian factory already have current Moto2 World Championship points leader Sam Lowes tied up for 2017 and 2018, but are one of the teams on Espargaro’s radar.

When asked about his future and Aprilia, the Spaniard replied with: “They’re one of the options we have, but we still need to decide. Everything happened really quickly. We started talking in Mugello with different teams, so we have different options.

“Aprilia is a very good choice, they have a bike which doesn’t seem that bad. For example in Jerez, in nearly made the podium on the Sunday, but they nearly stopped me going into Q2, they were right behind me. This shows the bike isn’t bad.”

If Espargaro beleives he has gone as far as he can in a MotoGP factory team, he can move to a new satellite team on a factory bike, or even change paddock, revealing he also has offers from the World Superbike paddock. Whilst Aleix wouldn’t confirm who the offers were from, he did admit that he had two factories offering him deals from WSBK.

“There are other deals too with factory bikes in satellite teams. We also have two factory teams in Superbikes,” he said.

One of the offers is believed to be from the Kawasaki team alongside reigning World Champion Jonathan Rea, whilst the other is thought to have been that of Yamaha, leaving Espargaro to partner Alex Lowes in the factory setup.

Espargaro had said that after Mugello he felt somewhat betrayed by Suzuki, and that they didn’t value him as a rider. Because of this, he has said that his next team, whoever they may be, must show that they really want him.

“The most important thing is that I can go somewhere where they show they really want me and I’m important to them,” he said.

“It’s important to enjoy your life and be happy.”