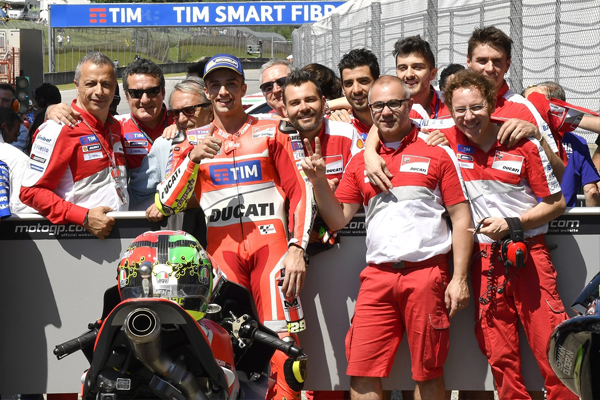 A bad start cost Andrea Iannone a shot at the victory in todays Italian Grand Prix at Mugello.

The Italian started his home Grand Prix from the outside of the front row and was optimistic in his chances at claiming Ducati’s first MotoGP victory since Casey Stoner’s win in Australia back in 2010.

Iannone was however marred by an awful start that saw him drop right down the field down to eleventh position after the first lap. ‘The Maniac’ battled his way through the field and eventually managed to get past both Dani Pedrosa and his team-mate Andrea Dovizioso to claim his second podium of the season.

Despite finishing in third place, Iannone was left frustrated thinking about what could have been had he got off the line well.

“I am very happy because I made a great recovery and I had a better pace than all the other riders on the track, but unfortunately I couldn’t get a good start,” the Italian explained.

“I’m disappointed about that because if I had been closer to the leaders I think I could maybe have been able to fight for the win. When I caught Dovizioso we passed each other a couple of times and we lost a bit of time: after passing him however I no longer had any chance of catching the two up front.

“I was quick throughout the weekend and this means that I have improved a lot as a rider and that the bike is competitive. In two weeks’ time at Barcelona we will try and do even better.”