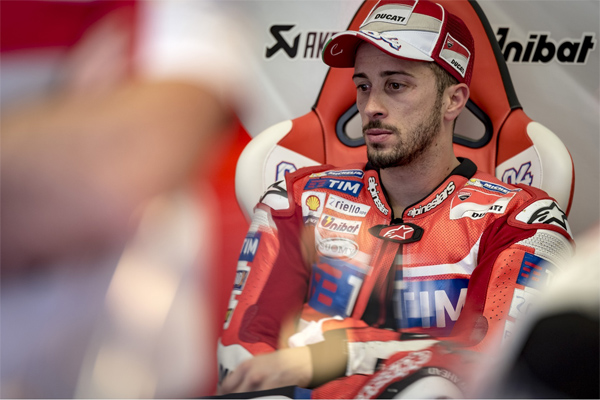 Andrea Dovizoso saw any chances of a podium at his home Grand Prix in Mugello ruined by arm pump issues.

The Italian made a great start and progressed through the field well from his 13th position grid start, eventually working his way up to third position after Valentino Rossi was forced to retire.

Despite seeing a podium finish slip through his grasp, Dovizioso was happy to see the chequered flag and pick up a solid fifth position at home.

“The weekend finished with a good fifth place and that’s positive, especially since I haven’t seen the chequered flag for quite a few races,” said Dovizioso.

“Starting so far behind could have penalised me, but I was able to get off the line well and immediately reach the leading group.

“We had worked well on race pace and so I was quite quick, but I was unable to be smooth and half-way through the race I had a problem with arm pump in my right arm and lost a lot of my strength. This problem forced me to drop my pace, but above all it caused me to make a few errors including one at San Donato, which prevented me from remaining in the battle for the podium in the last few laps,” he explained.

“I’m disappointed for the team because despite it being a difficult weekend, we managed to find a very good race pace.

“A podium would have been a good reward but unfortunately this time we couldn’t make it, so we’ll have to continue working to do better from the next round onwards.”