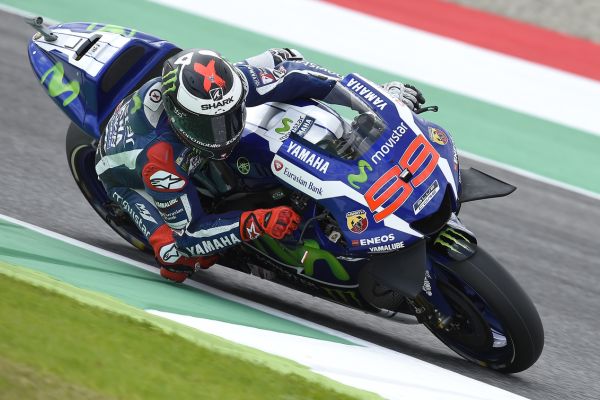 Jorge Lorenzo gave an ominous message to his rivals in Mugello, by insisting he can go even faster tomorrow!

The World Champion ended the first day of free practice in Italy second fastest overall ending just under two tenths off the fastest time of the day set by Ducati’s Andrea Iannone.

Iannone was the only man to dip into the 1’47’s, however Lorenzo’s time of 1’48.157 was good enough for him to comfortably sit ahead of third placed Ducati wildcard Michele Pirro. After FP1 was largely a write-off due to the damp conditions from overnight and morning rain, Lorenzo decided to run longer runs in the afternoon session to maximise time on the Michelin rubber.

The current series points leader was generally happy with his first days work at a circuit he loves.

“I set a 1’48.4s on the first run so that is a good lap time at this track on this bike with these tyres,” explained the 29-year-old Spaniard.

“In the last run, with the same tyres, I improved the lap time even more, so the feeling, starting with this setting, is good.

“Tomorrow, I think we can improve everything a little bit more and go faster.”