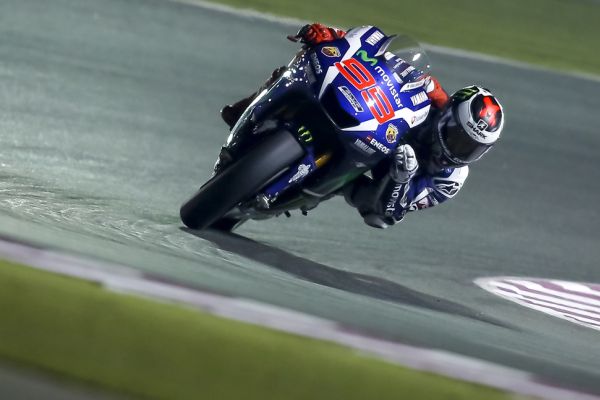 Reigning MotoGP World Champion Jorge Lorenzo asserted further dominance over the MotoGP field as he topped the first day of the final MotoGP pre-season test of 2016 by nearly half a second under the floodlights in Qatar.

The Spaniard came to Qatar on the back of destroying the competition in Sepang but facing a few more issues in Phillip Island, but laid his marker down for the start of the 2016 season in typical Lorenzo fashion.

Lorenzo jumped to the top of the timing sheets early as the first man into the 1.55’s and he continued to lap faster and faster. Lorenzo managed a best lap time of a 1:55.452 which was nearly half a second faster than the next fastest man, Maverick Viñales. Lorenzo’s best time of the evening was still 1.3 seconds off of last years pole position time, showing the gap that still needs to be bridged.

The Michelin tyres are one of the big changes for 2016 and after adapting to the new tyres perfectly in Malaysia, Lorenzo is absolutely delighted with how he and his Yamaha M1 have have taken to the new French rubber.

“I think we made a good start to the Qatar test, I have a good feeling especially with all tyres,” said the 28-year-old.

“The feeling with the tyres is much better compared to Phillip Island, the weather is better and the combination of this track, the bike and Michelin is similar to Sepang.”

Despite topping the first day by over 0.4 seconds, the World Champion still feels that there is work that can be done with the new Magneti Marelli standard ECU, as they look to get back to the times of last season.

“We still need to improve the electronics, but to be one of the fastest ones on the first day is a good beginning.

“Let’s see how the performance will develop tomorrow.”