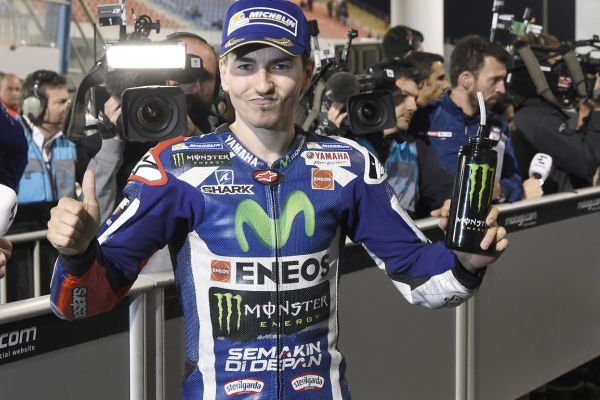 2015 MotoGP World Champion Jorge Lorenzo displayed a masterclass in winning the opening MotoGP race of 2016 ahead of Andrea Dovizioso and Marc Marquez.

The World Champion overcame early pressure to eventually edge away from an intense battle for the final two podium spots, winning the opening Grand Prix of the 2016 season by just over two second.

Behind Lorenzo, Dovizioso overcome a tough challenge from Marquez to claim his first podium of the season, whilst Lorenzo’s team mate, Valentino Rossi had to settle for fourth position.

The World Champion was faced with early pressure after taking the whole shot, he was eventually passed by both factory Ducati’s. Lorenzo had to bide his time, watching Andrea Iannone crash out from in front of him. He eventually reclaimed the lead from Dovizioso on the ninth lap of 22, and he wasn’t passed thereafter.

As Lorenzo edged away from the chasing three, Marquez started to apply pressure on Dovizioso, closing in all lap, but the far superior top speed of the Desmosedici held keep Dovizioso ahead of the 22-year-old.

Marquez eventually managed to claim second place with three laps remaining, only to see Dovizioso slide back past him as the riders starting the final laps. Valentino Rossi sat patiently behind waiting to take advantage of any mistakes, although Dovi and Marquez didn’t give the nine-times World Champion a sniff.

Behind the front four, Dani Pedrosa held off Maverick Viñales who was visibly disappointed, but matched a career best sixth position.

Pol Espargaro finished as the top of the satellite riders as he pipped Bradley Smith to seventh place, with the Tech3 duo holing off the satellite Ducati duo Avintia’s Hector Barbera and Pramac’s Scott Redding, who rounded out the top ten.

Aleix Espargaro rounded out a thoroughly miserable week, coming home in eleventh the impressive duo of Eugene Laverty and Alvaro Bautstia on their respective Ducati and Aprilia’s.

Marc VDS duo of Jack Miller and class rookie Tito Rabat rounded out the finishing riders, all of whom claimed World Championship points.