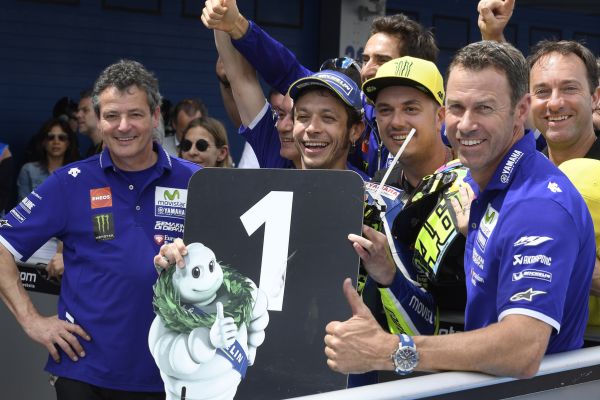 Nine-times World Champion Valentino Rossi has claimed his first victory of 2016 in dominant fashion ahead of Jorge Lorenzo and Marc Marquez at a scorching Jerez.

Starting from pole position for the first time since Assen last year, Rossi managed to get off the line well and lead into the first corner, with his team-mate Jorge Lorenzo right on the rear tyre of the Italian. Lorenzo managed to take the lead for all of one corner, however Rossi snapped right back before eventually gapping the Spaniard.

The Doctor managed his tyres and the gap back to Lorenzo perfectly, en route to winning his 87th premier class race by 2.3 seconds.

Behind Rossi, Lorenzo reduced the gap to Marquez at the top of the World Championship standings to just 17 points after holding on Marquez during the early stages of the race before breaking Marquez and pulling away to finish a very comfortable second position.

“This was the perfect weekend. From Friday we started very well,” said the Italian. “The bike was fantastic. Thanks to everyone and especially my crew. I had a good pace, a good start and it’s great to win like this.”

Dani Pedrosa rolled back the years with a rocket start and in the first five laps looked more than capable of challenging the front runners. However that pace proved to be short lived, although he did manage to hold off intense pressure from Aleix Espargaro for over ten laps.

Maverick Viñales finished behind his team-mate in sixth position ahead of top Ducati Andrea Iannone who could only manage a best finish of 7th place after a short but intense battle with Pol Espargaro, who finished in eighth place.

Eugene Laverty continued his stunning start to the season and finished second Ducati behind Iannone and just ahead of Hector Barbera who rounded out the top ten.

Cal Crutchlow could only manage a best finish of eleventh place but top Brit ahead of Smith. Loris Baz, Stefan Bradl and Yonny Hernandez rounded out the point scoring positions.

Marquez’ lead has been reduced to 17 points at the front ahead of Lorenzo and just 24 points ahead of Valentino Rossi.

Andrea Dovizioso’s miserable start to 2016 continued after he was forced to retire with a rear tyre/bike issue whilst in seventh position.