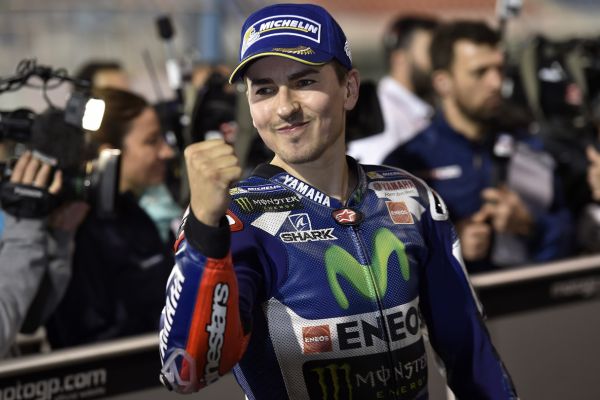 Lorenzo posted his eventual pole lap time of a 1:54.543 on his first flying lap, and despite red helmets lighting up regularly, nobody could match the time set by the Spaniard on his fresh Michelin tyres.

Behind Lorenzo, Marc Marquez enjoyed his Saturday evening making progress and will start from second place, even if he did complete another flying lap after already completing the chequered flag, thinking he had claimed pole.

Maverick Viñales continued his stellar start to the 2016 season and will start from the outside of the front row.

Andrea Iannone was inadvertently held up by Pramac Ducati’s Scott Redding on his final flying lap. He will head the second row where he will be joined by fellow Italians Valentino Rossi and Andrea Dovizioso.

Dani Pedrosa has work to do from the third row, where he will also head two compatriots in Hector Barbera and Pol Espargaro, whilst the symmetry was rounded out with the British trio of Cal Crutchlow, Bradley Smith and Scott Redding.