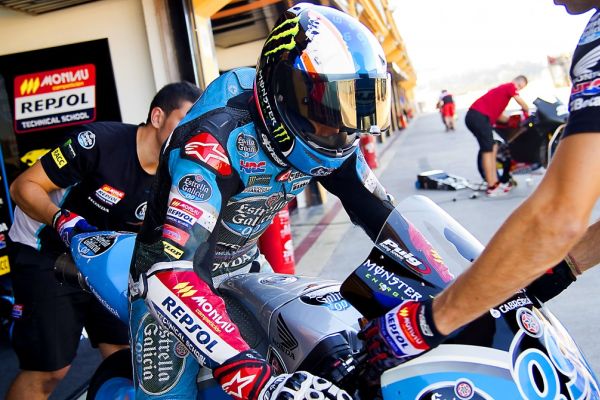 Jorge Navarro’s time from the first day of testing in Valencia was good enough to see him end the two-day test fastest in Valencia.

The Estrella Galicia 0,0 rider completed an impressive 186 laps over the two days, and managed a best lap time of a 1.39.122 on his 39th lap of the first day. The 2015 Moto3 rookie of the year got through 100 laps on the first day and focused on parts for 2016, including different setups, with an eye on a new chassis and suspensions.

“These were two very productive days of testing. We have worked with the parts for 2016, tested different setups and focused mainly on chassis and suspensions. We are very pleased with the results and with the feeling I had on the bike,” said the 19-year-old.

“We had very good riding conditions and so I did 100 laps yesterday and 86 today; that helped us to ride fast, get a good pace going and find a compromise.

“The 2016 Honda is very competitive; there are still aspects where work is needed in order to improve, but I think we can go into February strong.

“After an intense year in which I learned so much, now I get to rest a few days before starting my fitness training plan. I will be following it over the next few months, until we get back on the bike in mid-February.”

Brad Binder’s time from the second day was enough for the South African to be second on the timing sheets, just under half a second off Navarro’s time. Binder’s lap of a 1.39.607 was just 0.145 ahead of Navarro’s new team mate, Aron Canet. Canet fresh off his exploits at Valencia in the Moto3 Junior World Championship was forced to sit out the first day as he recovered from an ankle injury.

Nico Antonelli was fourth fastest on his Honda, just ahead of Red Bull Rookies 2015 Champion Bo Bendsneyder who will join Brad Binder as a full-time rider in 2016 in the Red Bull KTM Ajo team. Antonelli’s team mate, Jules Danilo was the sixth fastest and the last of the full time riders who took place in the end of season test.

The winter testing ban means the Moto3 paddock will now be on a well deserved break until February next year.