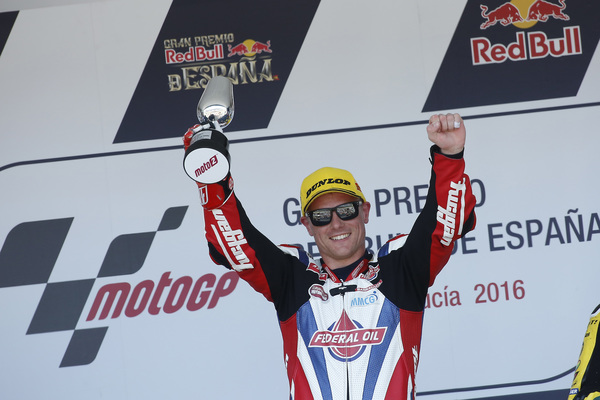 Sam Lowes converted his pole position into his first victory of 2016, building on his Moto2 World Championship lead in Jerez.

The Brit held the World Championship lead over Alex Rins by a single point coming into Jerez, however he will leave the Spanish circuit with a 10-point lead after his domination in race. Lowes was beaten to the first corner by second place starter Jonas Folger, however a small mistake by Folger into the dry sack corner allowed Lowes through. Once taking the lead on the second lap, Lowes was never overtaken again.

The Gresini rider was pressured intensely by Folger for over half of the race, however Lowes’ consistent lap times eventually broke Folger, meaning the Brit ended up winning allowing his second ever Moto2 victory by race by 3.163 seconds.

After taking second place finishes in both Argentina and Austin in the last two Grand Prix, Lowes was obviously delighted to have gone one step further and claimed victory in Jerez.

“I arrived two second places, obtained by the very solid performance, so I was confident ahead of this event, I wanted to try to win and I did,” said Lowes.

The track continued to warm-up through-out the race causing many riders to crash. Lowes caused him an issue but the testing from the winter helped him find the perfect set-up for any conditions faced today.

“It was a long race, no doubt,” explained Lowes. “I knew that Folger would keep a good pace and I knew that even Rins was the game, so I expect a tough race.

“The track conditions have changed several times over the weekend and today have changed again, with higher temperatures. In any case here in the winter we have made many tests and thanks to the work the bike is always very well behaved.

“I’m very happy that I got the first victory of the season and now looking already towards Le Mans,” he said.