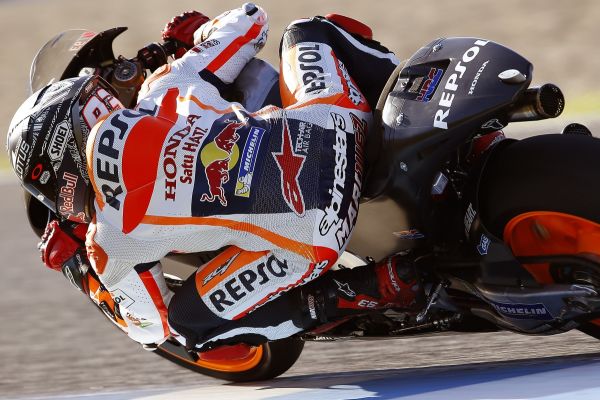 A day after ending the first day of the private test in Southern Spain, Marquez was back to work today, getting a further 58 laps under his belt on another sunny day. After working on the new 2016 engine, his attention today shifted away from the engine and today was on the new Magneti Marelli software.

“Today I concentrated on the Magneti Marelli software and mainly the new engine,” said the former World Champion.

“It’s clear that we need a different mapping for the 2015 and 2016 engine – as they are completely different character – so we chose to work more on the 2016 version.

“Maybe tomorrow we will work on the 2015 engine, but we will have to see. It takes a lot of time working on the new electronics to change things and this extends our time in the box, but we are still far from getting the best out of this software.

“Last year’s engine was more aggressive in the top end and now we have more power in the lower rpm but still it’s not clear the best way to deliver the torque, we must find the best balance. We didn’t do too much on tyres today and the front tyre is still difficult to understand but we know Michelin are working hard.”

Behind Marquez was Pramac Ducati rider Scott Redding. The Brit impressed on his debut on the Desmosedici during the post season test in Valencia, and during his first day of testing he continued his impressive start with Ducati.

In Valencia Redding was tasked with being the first man on a Ducati to work with the new 2016 electronics, today he continued to work, this time on more set up of the bike as he continues to adapt and adjust after spending two seasons on a Honda.

“It went good,” said Redding. “The feeling was good with the bike, especially coming back from Valencia, not going straight from a Honda to a Ducati. Actually having some time off to go onto that bike was quite good.

“Always at Valencia I felt, not uncomfortable but different. So I felt good straight out of the box, even in my first run I did a 1’40.8s, so to have the feeling there already was quite good. We tried a few things with the bike, and it was a little bit better. We were trying more with the weight distribution, more rear, more front, a bit higher, and I just managed to gain more traction during the day, but I just lost a little bit in braking stability. So we are trying to find a combination to get the best of both for tomorrow.

“I’m starting to get more confidence with the front, starting to load a bit more the front. The rear’s still not bad. Not a big difference between the hard and the soft rear. Just the main thing is a little bit light feeling on the front in fast corners. And in hard braking I was having some skidding today.”

Whilst Marquez and Redding had good days on their respective Honda and Ducati’s the tyre issues still remain with the Michelin tyres, as both Michele Pirro and Eugene Laverty ended up crashing out of the days action.

Pirro suffered a fast crash in the penultimate corner, the fast right hander around the back of the pits, fortunately the Italian was able to walk away unharmed. Fellow Ducati rider Eugene Laverty wasn’t as fortunate, as he will return home with a broken left wrist.

Laverty, who is due to marry long term girlfriend Pippa Morrison this weekend, last the front end after just touching the brake at turn 7. The Irishman was transferred to a local hospital for a CAT scan to ensure there were no further injuries. Tomorrow he will go north to Barcelona where famed MotoGP, Dr Xavier Mir will conduct surgery on his wrist.

“It’s a disappointing end to a good day of testing,” he said.

“We made good progress with the new electronics and the last exit before I crashed was probably the first time we had the bike working correctly. The lap times were getting better and then I crashed, so I’m disappointed.”

Marquez and Pedrosa will continue to test tomorrow, where they will be joined by Factory Ducati duo Andrea Iannone and Andrea Dovizioso, before the winter testing ban comes into play from the 1st December.