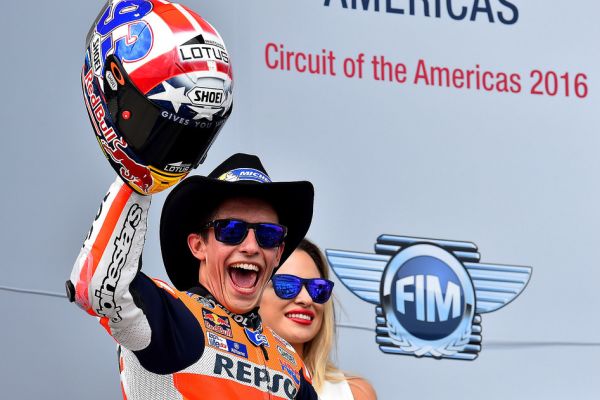 Marc Marquez was understandably very happy to extend his unbeaten run at the Circuit of the Americas after a dominant display in Austin.

Marquez came into the weekend overwhelming favourite and delivered, topping every session over the weekend bar Sunday morning’s warmup session.

After early pressure from Jorge Lorenzo and Andrea Dovizioso, Marquez eventually broke away from the rest of the field, on his way to claiming an unprecedented fourth victory at CotA and a tenth straight win in America, spanning over two class, three circuits and six years.

Despite his domination over the years, Marquez was still nervous going into the unknown with the Michelin tyres.

“I’m very happy with how the whole weekend has gone. This is a circuit that I like, one of my favourite, but there were some unknowns here because just before the race we decided to run the soft front tyre,” said the 22-year-old.

“In the end the team advised me very well, because the change gave me the good feeling with the bike that I had partly lost in the warm-up. I have to thank them all, as well as the Michelin technician. When I asked, they told me that I would be okay for the first 12-15 laps, and then after that I would have to manage the situation more, which is exactly what happened.

In taking victory in Texas, Marquez has extended his World Championship lead to 21 points already after just three rounds, with the MotoGP paddock heading back to Spain for the next round in two weeks time.

“We’ve taken another victory here in Austin and are now on a run of four in a row, which is great. In addition, the joy of the team after we won illustrates everything we’re working on,” said Marquez.

“In these first three races of the year, we’ve made good use of the situations that we’ve encountered.”