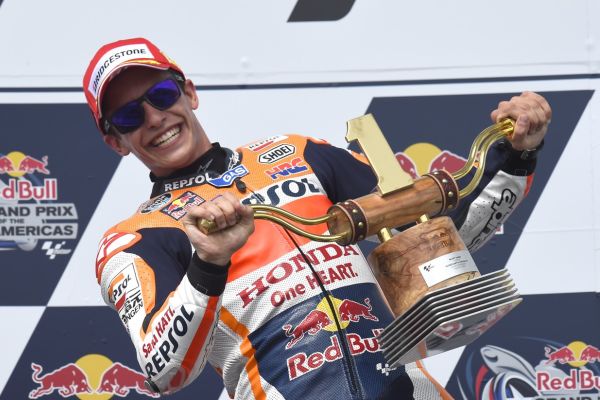 Fresh on the back of his first win of 2016, Marc Marquez heads to Texas ready to defend his 100% record at the Circuit of the Americas.

The Repsol Honda rider demonstrated the kind of pace and consistency that saw him win the first eleven races of the 2014 season last time out in Argentina. With the race run in mixed conditions and covered in controversy over tyre dramas, Marquez perfected his race strategy and bike switch on his way to taking the lead in the MotoGP World Championship.

Since joining the MotoGP class in 2013, Marquez has won all of the seven races held on American soil, including the three previous Grand Prix’s in Austin.

“We’ll see how we manage in Austin this year. It’s a track that I like, where I feel strong, and where I’ve always had good races and good fun,” said the 23-year-old.

Despite looking like they’ve found something to build on in Argentina, Marquez insisted that he would have to remain patient and evaluate his chances in Texas before targeting an unprecedented fourth victory in a row at the Circuit of the Americas.

One of the biggest problems around the 2016 Honda RC213V has been power delivery from the new engine. The overly aggressive has left the Honda riders struggling to get the power down, resulting in poor acceleration. This is a problem which has plagued Honda for over 12 months now, and COTA may be a track which favours strong accelerating bikes.

“That said, the track rewards strong acceleration, which hasn’t been one of our strongest points so far this year, so we’ll have to wait and see how we can manage the situation,” he said.

“We’ll keep working hard, as we did in Argentina, and we’ll try to find the best pace for the Sunday race.”