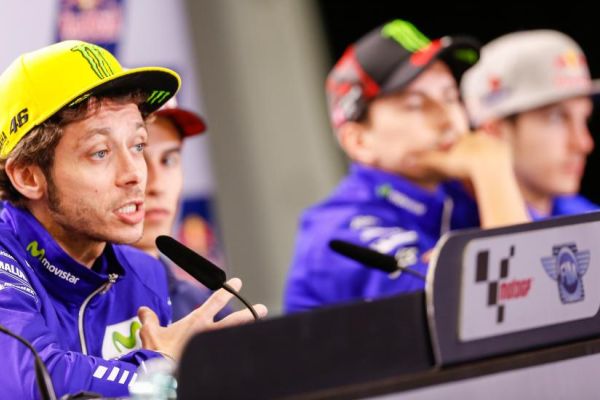 Nine-times World Champion Valentino Rossi has said that should Jorge Lorenzo complete his deal to move to the Factory Ducati team, it would be a “bold choice”.

The MotoGP World Champion looks set to finalise a deal with the factory Ducati team, leaving Rossi and the Factory Yamaha team behind.

That sparked a war of words between Rossi and Lorenzo, with the Spaniard claiming Yamaha was the only offer that Rossi had, whilst claiming he had the pick of any ride. The Italian hit back whilst claiming that Lorenzo “didn’t have the balls” to leave Yamaha and join Ducati.

“If he does, it will be a bold choice,” said the Doctor during the pre-event press conference in Austin.

“I wish him and Ducati luck,” he said.

“I think he can still be competitive. Lorenzo is a strong rider and now the Ducati is a competitive bike.”

With Rossi signed up with Yamaha for another two seasons and Lorenzo seemingly soon to be on his way to Ducati, Rossi was asked how about how that has effected the already fractured relationship between the two.

“The relationship is no,” he said. “Everybody in the box just wants to do their job and we come to race.”

The path from Yamaha to Ducati is a familiar one to Rossi who made the same move at for the 2011 season. However, Rossi’s stint with Ducati turned out to be the worst two seasons of his illustrious career.

In spite of how it panned out, Rossi says he doesn’t regret the decision to move to Ducati, and can understand why Lorenzo is taking the Ducati offer as seriously as he is.

“The situation Lorenzo finds himself in is similar to mine at the time I did it,” Rossi explained.

“I had been with Yamaha for many years and I needed a new challenge. I spoke with Filippo Preziosi, who presented to me an interesting project to improve the Ducati, and try to make it easier to ride for others.

“Ducati have made lots of progress over these past few years. The bike is now very competitive and it’s very quick in a straight line. In the first two races of the year, they’ve shown they can be at the front.”

Rossi eventually had enough of answering questions from the journalists regarding the future of his team-mate, eventually saying: “I do not want to talk about the future of Lorenzo and Ducati.”

Some members of the Spanish press had expected Lorenzo to announce his switch ahead of the race today in the pre-event press conference. However it now looks likely the deal will be confirmed ahead of Lorenzo’s home race in Jerez in a fortnights time.