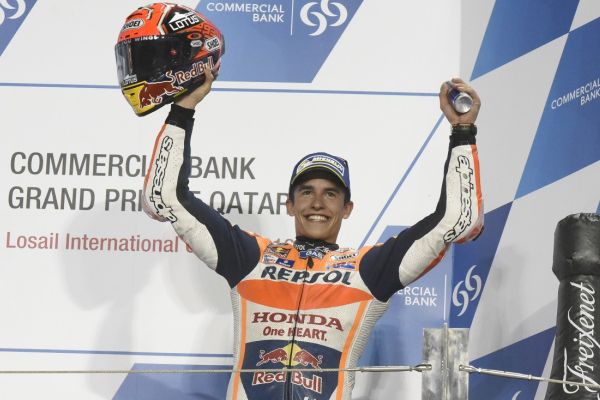 Double MotoGP World Champion Marc Marquez has admitted his priority is to remain with the Repsol Honda team, although he hasn’t been offered a new contract… yet.

The Spaniard turned some indifferent testing form around during the opening weekend of the 2016 MotoGP season as he managed to secure an impressive third place after a race long battle with Andrea Dovizioso and Valentino Rossi for the final two spots on the podium.

As well as the return of the racing, the news that Valentino Rossi had signed a contract extension with the Yamaha team and that Bradley Smith had signed with the factory KTM team, meant that the paddock was filled with rumours of what rider could end up where all weekend.

The biggest wildcard of 2017 remains the Factory Ducati squad. The GP16 showed it pace in through pre-season and then again in Qatar. This has given Ducati a real belief that if their current riders cannot compete for a World Championship this season, they will need to “upgrade” the riders in 2017. This theory comes on the back Ducati Corse Sporting Director Paolo Ciabatti admitting it would be foolish for his team to not target Lorenzo or Marquez, back in January.

Whilst the future of reigning World Champion Jorge Lorenzo is attracting a lot most of the attention, Marc Marquez admitted that he has yet to receive a contract offer from Ducati, or anyone for that matter, including his current Repsol Honda team.

“Valentino has opened the market. But it’s clear that my priority remains to stay with Honda,” the 23 year-old told Spanish radio station Onda Cero.

“Although at the moment, I don’t have any offers. Not from Honda or from Ducati. When we begin to talk about a new deal, I’ll be ready.”

Marquez did reveal that he is yet to open contract negations with his current Repsol Honda team, as he was more focused turning around his fortunes on the track, rather than trying to tie up his future off it.

“I didn’t want to speak or discuss contract offers until I regained confidence with the bike and I was back fighting for podiums,” he added.

“I needed to go back to my best level, because it was hard to see me eighth or ninth in during winter testing.”