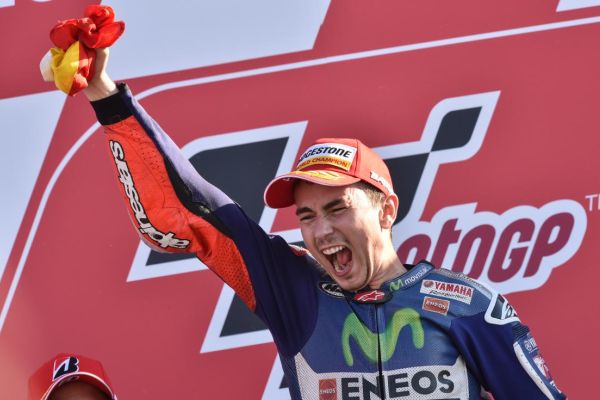 Jorge Lorenzo came from behind to win his third MotoGP World Championship and fifth overall after an inch perfect race in Valencia.

The Spaniard came into todays race seven points behind World Championship leader Valentino Rossi, knowing that should he wins today’s race, it should be enough to give him his fifth World Championship. Lorenzo led the race from the start and crossed the line leading every second of the race, and with Rossi only finishing fourth it was enough to see him win the 2015 MotoGP World Championship.

“It was one of the toughest races, if not my toughest race, because the tension was very high from the first corner,” said the 28-year-old. “I tried to push like normal in the first laps with the new tyre, then it was difficult because the rear tyre started to drop, especially on the right hand side.

As well as the problem with the tyres degrading, Lorenzo was having issues with the sun reflecting off his pit board. It wasn’t until the final laps, where he saw that both Marquez and Pedrosa were with him that the sun gave way.

“Also it was a problem to see the board and half of the laps I couldn’t see it,” he said. “So I pushed at the maximum and gave everything I had from the first corner to the last one, not thinking about anything but just to ride and give the maximum with the bike on the tyre.

“Finally on the board in the last laps I could see Marc was getting closer and also Dani was recovering so much, so I kept pushing and trying to go as fast as possible. I could not see where Valentino was; I imagined that he was in fourth position, so I tried to ride at my best and I believe there was still some laps to the end, but when I entered the last corner I see the chequered flag and I say okay, it is mine and I could breathe deeply.”

With his third premier class title, Lorenzo wrote his name into the record books alongside some legendary names. He joined Yamaha legends Wayne Rainey and Kenny Robert Sr. on three premier class titles, and also started to appreciate the magnitude of his achievements in motorsport in general.

“Finally, the effort was worth it because now we can say that we are five-times world champion and three times in MotoGP, equalling legends like Wayne Rainey, my friend and legend Kenny Roberts Snr and in the motorsport world, Ayrton Senna, so I am starting to feel that,” said the Spaniard.

“We have to enjoy at the maximum this afternoon and tonight, this week and next week because these moments are very difficult to reach. We are going to fight to have it again but it will be difficult. I took the Spanish flag and I got very emotional; normally I don’t cry but this time I couldn’t avoid this moment and I couldn’t enjoy or say hi to the fans because I was really, really emotional.”

As well as drawing him level with the likes of Rainey and Kenny Roberts, Lorenzo is delighted to have finally won a World Championship competing against Marquez, to round out the trio of Rossi, Stoner and Marquez. The three riders he calls the best of the 21st century.

“I knew this championship was very important because for me, Valentino who is older than me, Casey who is more or less the same age as me and Marc who is younger: for me they are my three hardest rivals but in general, in my opinion in the 21st century, they have been the best riders and to be able to win here was my goal and I feel very proud,” he said.

“If Valentino was the champion he could say that, but Marquez cannot say that because Casey has retired already, so it was very important for me to win.”

With two of the most eventful weeks of MotoGP behind him, Lorenzo said he had to do it the hard way, becoming the first rider since 2006 to win the title after coming into the season finale with a point deficit.

“There has been so much drama in the last weeks, in the last races; in the last race, it couldn’t be more emotional or difficult for both riders and finally in the 17 races I could not be leading the championship by some points, just I could equal Valentino in some races.

“Finally in the last moment, in the last race, I could win my third world championship in MotoGP – the fifth in my career – so I’m super emotional, super happy and proud and I just want to enjoy this with my team and with the people who made this possible to happen; with Yamaha and all my team who made this happen. We won everything possible and we made the best bike in 2015, so I’m very proud to be part of this.”

“The first two races have been a nightmare because we have the potential, but for some reason we never reached the podium,” he explained. “In Qatar for the problem with the helmet, in Austin I wasn’t perfect and in Argentina we have some problem with the tyres. So never on the podium and we have 29 points disadvantage but finally in Jerez we found a good feeling, a good bike and we won four races in a row.

“We stayed on the podium for some races but we had some bad periods in some races. I was able to be very competitive in the practice but not in some races and especially in the rain and for the crash in Misano, I lose a lot of points again. Then finally, luckily, we could recover all the points in the last four races: so much drama, but finally the championship is in our hands.

“It was a very hard championship in general and probably the hardest racing in all my life because there was a lot of pressure on the grid, on the start and a lot of tension on the bike.”